Rupert Murdoch so feared a British Labour government coming to power last month he personally berated journalists at his The Sun newspaper for not doing enough to stop them from forming government.

The allegations, published in The Independent, said Murdoch believed that if the Tories weren’t returned in last month’s general elections – which they subsequently did win, returning David Cameron to Number 10 – then it would be the end for Murdoch’s three British newspapers The Sun, The Times and The Sunday Times. 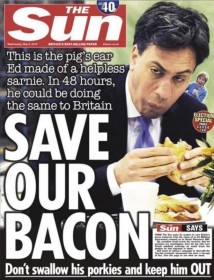 The then Labour leader, Ed Milliband, had said if elected he would not allow any one owner to own more than 34 per cent of the UK media which would have meant News would have had to offload one of its three mastheads.

It was reported that Murdoch allegedly “instructed (journalists) to be much more aggressive in their attacks on Labour and more positive about Conservative achievements in the run-up to polling day”.

Milliband had long criticised News Corp and Murdoch himself over the phone tapping scandals, while Rupert had made no secret of his disdain for the opposition leader.

A spokesperson for The Sun said its editorial merely mirrored the concerns of the electorate, while Labour has allegedly complained of bias, of policies being twisted and repeated parodies of Milliband.

Thompson reportedly said news sites such as BuzzFeed offered readers only trash and online audiences were increasingly “promiscuous”. He said the panacea to all that noise and retaining loyal readers was quality and investigative journalism.