[Warning: article contains language and images some readers may find offensive.] Stories of people shopping for fashion online only for the garment to arrive and look horrendously different from what had been marketed have become almost daily fodder for tabloids news sites.

However, a mum in the US can now add an interesting twist after she ordered a cute Wind In The Willows-inspired T-shirt for her three-year-old daughter only for it to arrive with a frog and toad riding a bicycle and the slogan “fuck the police” emblazoned across the front.

Kelsey Dawn Williamson bought the T-shirt for her daughter, Salem, on the Chinese online shopping store Aliexpress for $US4.95. 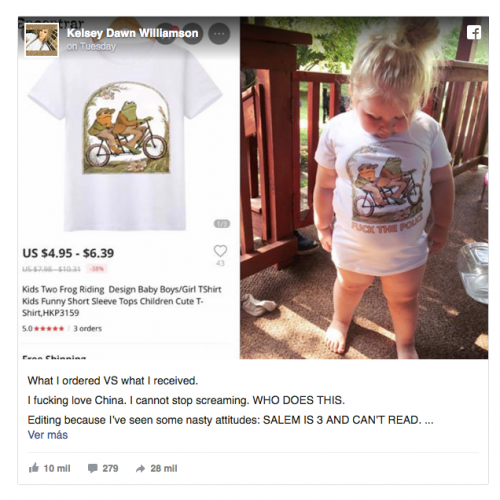 Williamson then shared an image of Salem in the offensive garb on Facebook which, as these things tend to do, suddenly went viral and she soon found herself being hounded by news sites.

“I literally did not know how to react so I just took a few moments to stare at it and try to process,” she told Buzzfeed News.

Williamson later told KidSpot: “I originally just shared the t-shirt with only my friends until one of them wanted to share it to their profile, so I made it public. I definitely wasn’t expecting it to go this far. It all happened so fast.”

However, Williamson admitted that she’d also been attacked online for sharing the image of daughter wearing the offensive slogan.

“I almost even deleted it, I just wanted it to stop,” she said. “I still see mean comments occasionally but it’s gotten easier to just ignore it.”

Thankfully, most people were able to see the funny side.