Well, if the latest figures from Commercial Radio Australia are anything to go by, Aussies just can’t get enough of radio.

The numbers also suggest younger audiences are continuing to listen to commercial broadcast radio, as there’s 30,000 more people in the 18-24 age brackets that are tuning in.

“Radio is also continuing to stay relevant to younger audiences, with 30,000 more listeners in the 18-24 age group turning in, which points to a positive outlook for the future,” said Joan Warner, CEO of Commercial Radio Australia.

Here’s a snapshot from the past five years of people tuning into radio. 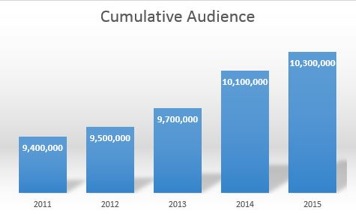 The data is based on the surveys from research company GfK, who measure the radio ratings.

And some 6.9 million tuned in to the drive slot. In Melbourne, SCA’s Hamish & Andy were winning in drive, ABC dominated in Sydney, NOVA’s Kate, Tim & Marty were number one in Brisbane, Adelaide and Perth.

The positive numbers go hand in hand with ad spend increasing this past year too. According to the Standard Media Index, ad bookings for radio have increased 7.8 per cent over the last 12 months.

“2015 was a very good year for commercial radio, with listener numbers rising to record levels and a healthy increase in audiences for both the critical breakfast and drive time shifts,” said Warner.

And while various other platforms such as podcasts and streaming services have come into play, Warner is confident the mass broadcast medium will maintain its appeal.

“People are listening to radio via multiple platforms, but traditional broadcast radio is still the preeminent means of consuming radio and is deeply embedded in people’s lives throughout their day,” she said.