Advertise with us
Posted 9 October, 2014


The use of mobile devices and social networks among Australian sports fans continues to grow with online overtaking print media for the consumption of sports content for the first time.

The Know The Fan – The Global Sports Media Consumption Report 2014 produced by Perform, Kantar Media and SportBusiness Group revealed the statistic along with others shared via the infographic below. 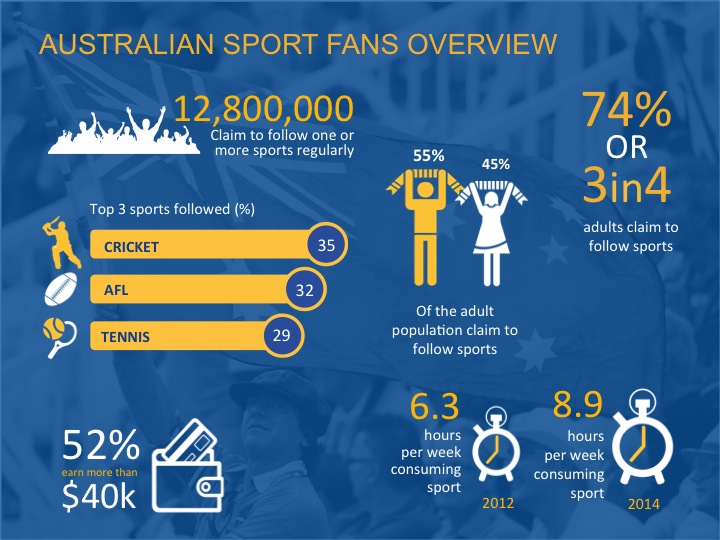 According to the report, approximately four out of ten Australian fans use mobile devices to follow sport in 2014. This represents an increase from just 28% consuming via this method in 2012. The study also shows that 62% of fans in Australia follow sport online, with penetration increasing from 55% in 2012, overtaking print media (57% in 2014).

The majority of online fans access content via a computer or laptop computer, equating to 59% of sports fans that do this. Smartphones are more widely used than tablets amongst the 41% of fans that follow sport via a mobile device, with 33% of all fans using a smartphone and one in five using a tablet computer to consume sport. Television continues to be the most popular medium for content consumption, used by almost all fans to follow sport.

42% of fans in Australia state that they have used a second screen device such as a computer, laptop computer, smartphone or tablet whilst watching sport on TV. Fans that use a second screen typically use these devices for two-three different activities.

One in three fans in Australia follow sport on social networking platforms, representing an increase from the 23% of fans who used this method in 2012. The time spent following sport via this method has remained consistent this year at just over one and a half hours per week. Facebook (78% of social sports fans) continues to be the most popular platform used, followed by YouTube (48%). Twitter and Google+ are used by approximately one in six social fans to follow sport.

Approximately one in four fans that use social networking platforms to follow sport in Australia share content from a team / league’s page or sports pictures. Short clips are the most popular video content that is shared on these platforms.

Alex Peebles, managing director, Perform Australia and New Zealand, said: “The results of the 2014 Know The Fan report in Australia reflect the rapidly evolving media landscape, and match what we are seeing across the globe, with sports fans continually looking to digest content on the move and as it happens. While it is no huge surprise, it is still a landmark year as we see online consumption in Australia overtake print for the first time. The 2014 report again provides the insight on which to build and develop a successful approach to today’s connected sports fan.”

The Know The Fan report shows how, over four years, fan engagement with sport has continued to evolve. In 2014, social media consumption of sport has also continued to grow in the majority of markets previously surveyed. With the number of devices available, this years report also looks at the content accessed by fans on second screens whilst they are watching sport on TV.

The report covers 16 global markets, 14 of which – Australia, Brazil, China, France, Germany, Great Britain, India, Indonesia, Italy, Japan, Russia, Spain, Turkey and the US – were monitored last year, whilst South Africa and the UAE are covered for the first time in 2014. In all markets 1,000 interviews were conducted online in February 2014. Combined, the total sports fan population across the 16 markets surveyed is representative of upwards of one billion people.