As any meat-loving radio host will tell you, having a militant vegan live on your show with a ham sandwich in full view is probably going to lead to some feisty on-air debate.

And that’s exactly what happened to UK presenter Jeremy Vine when he hosted Australian “celebrity” vegan activist Joey Carbstrong (no, we’ve not heard of him either) on his BBC radio show yesterday. 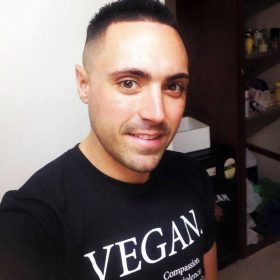 The on-air chat got off to a bad start when Carbstrong (pictured above) spotted the host’s lunch – a ham and cheese sandwich.

“I’m a bit upset to see your sandwich has a piece of a pig’s body in there. A dead pig that didn’t want to die,” Carbstrong declared on viewing the bready porcine fare. “Ham is a euphemism that actually comes from the flesh of a dead pig.”

Vine then responded: “What would you rather call it? ” Carbstrong replied: “I’d like you to call it the dead body of an animal that didn’t want to die.”

Listen to the tête-à-tête below:

Vine’s sangas then came under a full-frontal attack when the next filling was declared as cheese.

When asked Carbstrong had a problem with cheese, too, he replied: ‘The cheese comes from a mother who had her children taken from her, and had hands shoved in her anus and was artificially inseminated with bull semen. This is probably why vegans would say a dairy farmer is akin to a rapist.”

Carbstong continued: “I wouldn’t call a farmer a rapist. I wouldn’t use any of those words without explaining to them the process and why they involve themselves in these types of practices.”

After the chat, Vine said: “I obviously won’t eat this sandwich now…I might never eat it. But it’s offensive to see it?”

Carbstrong said that it was, telling the host: “I believe it’s more offensive to actually show me the piece of an animal who didn’t want to die than it is to call someone out for it.”