It’s become a tradition in the British Royal family that when a new Prince or Princess arrives, mother and newborn stand out the front of said London hospital to be photographed by the waiting throng of world media.

However, US baby company Fridababy is urging the Duchess of Sussex (aka Meghan Markle) to dispense with the tradition when she gives birth next month and has even taken out a full-page ad in the New York Times begging her to do so. 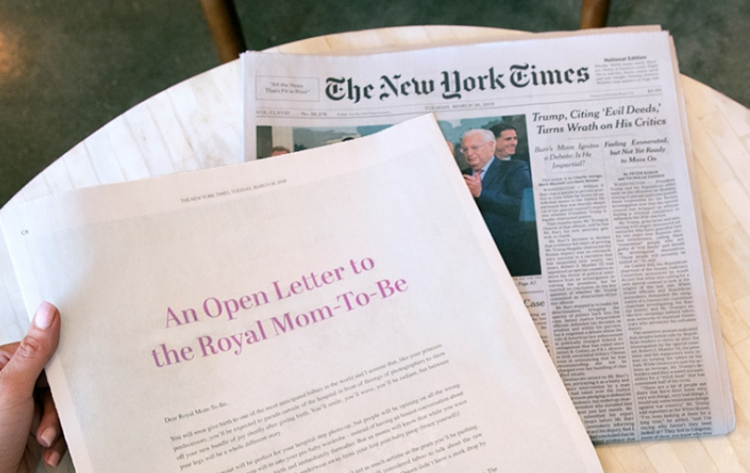 The ad argues that the traditional Royal baby photo is a an unfair representation of motherhood and is actually damaging to women.

Written as an open letter from Fridababy’s CEO and mother of three, Chelsea Hirschorn, the ad reads: “Sure your blowout will be perfect for your hospital step photo-op, but people will be opining on all the wrong things – like how soon you will fit into your pre-baby wardrobe – instead of having an honest conversation about what women go through during birth or immediately thereafter.

“Bringing a new life into the world usually starts with your vagina, and the aftermath is a mess,” Hirschorn writes. “The bleeding and swelling will linger, peeing will burn, and sitting like your old self will feel like a herculean feat.

“Women are expected to just throw on their new mom hat — and while some of us have the chicest milliner on speed dial, I promise you still won’t feel like yourself,” she said.

Hirschorn also warns of the dangers of new mums who get up and about too early straight after childbirth namely from the risk of a torn, damaged and bleeding vagina.

However, it all ends with a message of support: “So when the ‘big reveal’ day arrives but you’re feeling like all the King’s horses and all the King’s men couldn’t put your vagina back together again — use this stage to do your part for all women who are about to embark on their first ‘fourth trimester.’ Skip the pomp and circumstance of the baby parade.”