When an offensive anti-marriage equality poster campaign popped-up in Melbourne last week a number of news outlets were quick to report on and condemn the ads that led with the headline “Stop the fags”.

Despite reports the posters had been “plastered all over Melbourne”, it’s now believed the whole thing was little more than a social media prank.

Channel Ten even going do far today and admitting it couldn’t find any evidence of the campaign and the images it ran on its news bulletin had actually been doctored.

The poster was reportedly spotted in Melbourne’s Heffernan Lane and a photograph was uploaded to Twitter by childcare worker Dan Leach-McGill. 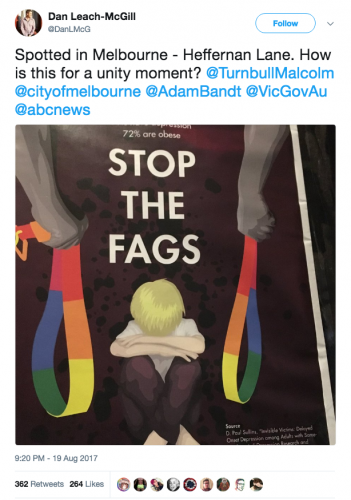 Despite condemnation from the prime minister down over the poster’s sentiments that inferred children of LGBTI parents were likely to be abused and of poor health , it’s now been reported that the poster originated in the US.

Even Melbourne City Council has denied the existence of the campaign.

A number of media outlets ran with the story including Channel Nine, News Corp and Channel Ten.

However, it was Ten who has well and truly got caught with its marriage equality pants down, admitting it photoshopped the poster onto a Melbourne bus stop for a news bulletin.

The fake campaign was outed by right-wing commentator Andrew Bolt in his newspaper column yesterday.

“Media outlets like Channel 9 and news.com.au agreed there were more such posters around Melbourne. As the Australian Women’s Weekly put it: ‘Melbourne streets plastered with disgustingly homophobic posters ahead of plebiscite,” Bold wrote.

“But Channel 10 had a problem: it could not find even one.