McDonald’s in Portugal has had to issue a swift and grovelling apology after a Halloween promotion for its ice-cream Sundaes managed to infuriate the Irish.

The promotion was called “Sundae bloody Sundae” and offered customers a two-for-one ice-cream deal with a strawberry topping. 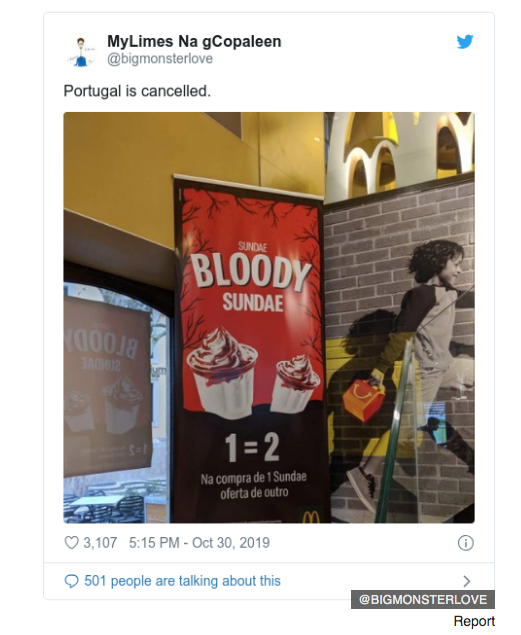 However, “Sunday Bloody Sunday” is an infamous time in Irish history when British soldiers shot and killed 14 unarmed men in 1972 who were protesting for a united Ireland in Derry in the north. The massacre later immortalised in U2’s 1983 classic hit of the same name.

The unfortunate Sundae promotion soon made it onto social media and caused the outrage you’d expect.

For its part, Macca’s immediately pulled the promotion and began drafting the obligatory apology statement.

The burger chain said it never intended for it to be an “insensitive reference to any historical event”.

A spokeswoman added: “We sincerely apologise for any offence or distress this may have caused.”

She explained the “Bloody” Sundae adverts were designed as a Halloween promotion and the chain had since cancelled it.

It’s not the first time companies and brands have used the slogan and caused associated outrage.

In 2013, a London bar launched a “Sundae bloody Sundae” cocktail complete with a toy solider. It was immediately pulled following outrage from Irish patrons.

Back in 2006, US ice-cream firm Ben & Jerry caused similar outrage when it launched a flavour called “black and tan”.  The dessert was meant to taste like stout and pale ale, however, many Irish quickly reminded the ice-creamer that the “black and tans” were a brutal paramilitary force deployed by the British during the Irish War Of Independence between 1919 to 1921.

In 2012, sportswear giant Nike was forced to apologise for calling a pair of its brand new skate shoes “The Black and Tan”, saying it had been “unofficially named by some using a phrase that can be viewed as inappropriate and insensitive”.