As headline sponsor of B&T’s 3% Conference Australasia, M&C Saatchi has nominated its head of art, Niccola Phillips to pen an opinion piece exploring whether creative departments are still as sexist as they appear from the outside.

You’re probably sitting there thinking not another bloody female creative whining on about how hard it is to be a female creative. Get over it. Move on already.

But here’s where we’re at. According to research carried out by The Agency Circle, three in every 10 Australian creatives are female. If you’re hunting around for a female ECD, it seems that you’ll find around three in every hundred. Up on stage at industry events, you’ll see roughly half as many women as men. And if you’re wondering about the pay gap? Well, I can’t tell you much about that, because no one’s being all that transparent about it. But let’s just go with the national average and assume that female creatives are currently being paid about 23 per cent less than their male equivalents.

But now, some good news. This year, here in NSW, women comprised almost exactly half of all successful AWARD School applicants, and six of the top 10 were women. There’s a new generation of female creatives who enthusiastically and wholeheartedly want to work in our creative departments.

Problem solved, then. Given another few years, creative departments should be headed for 50:50. The statistics should just play out from there. Shouldn’t they?

Are creative departments really still as sexist as they appear from the outside? That’s the question I’ve been asked the most over my two years as AWARD School head. Clearly, even before they enter the industry, many female creatives still aren’t confident that they’ll be treated as equals in a creative department. And honestly, I struggle to know what to say, because it’s complicated.

Personally, I love my creative department, and that’s why I’ve stayed there for so long. It’s open-minded, respectful, collaborative and dependably funny. It’s ridiculous and hilarious. But not every creative department I’ve worked in has felt so comfortable.

During Power of Ten sessions, a networking initiative for female creatives run by AWARD, female creatives swap stories of ‘mansplaining’ in their creative departments; of creative directors who disregard an idea when a woman suggests it, only to applaud when it is presented again by a male colleague. One woman describes the way she has to stand up in meetings to make herself heard (fun fact: women are interrupted 33 per cent more than their male counterparts during meetings). A number of female creatives observe how they have been passed over for tier-one briefs due to ‘inexperience’, while men of the same level were given a chance to ‘cut their teeth on something big’.

Yes, women leave creative departments for a whole host of reasons. But if you listen – actually listen – the next generation of female creatives are trying to tell you that they’re not being heard right now. Today. Years before parental leave and workplace flexibility enters their thinking. A survey run by SheSays and a trade media publication earlier this year reported that almost 40 per cent of women who left creative agencies did so because they didn’t feel valued or recognised. Women are being unconsciously overlooked every day. Hell, they’re unconsciously overlooking themselves. And they’re not always confident enough to speak up about it.

Okay, I can hear you sharpening your knives. Women need to toughen up. To speak up. To push back. And I agree. They do. But in an industry where 70 per cent of female creatives report that they have personally experienced sexual discrimination in their workplace, that isn’t always easy. The confidence gap starts early. Less than one in six Australian teenage girls believe that they are given the same chances in life as boys. It’s little wonder that women won’t apply for a position or promotion until they feel that they’re 100 per cent qualified, while men are confident in their ability at about 60 per cent.

So, what can we do about it? We can do unconscious bias training. Google has rolled it out across its 60,000 employees worldwide, and they have shared their unbiasing guide online. We can offer mentoring programs, internally and externally. We can do annual salary audits. We can improve our parental leave policies and build a more flexible, inclusive working environment.

But the simplest thing that we can do is listen. Offer all our creatives equal chances and opportunities, and then be receptive to what they come up with. If the quiet ones don’t speak up immediately, offer them the floor. Ask them to speak on panels and to judge industry awards. To judge AWARD School. To write articles. Give them the confidence to push on through. Let them know they’re being heard.

Just listen. Be respectful and egalitarian, and you won’t ever have to read another article like this one. 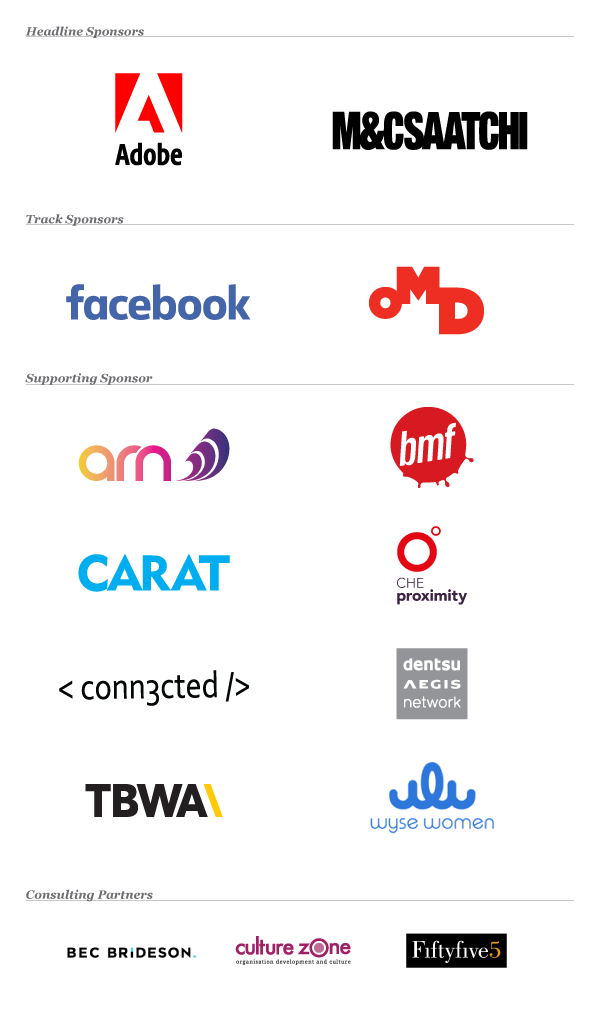