Tindall’s comments come from a provocative opinion piece he penned for the UK industry title Campaign. You can read the controversial column in full here. 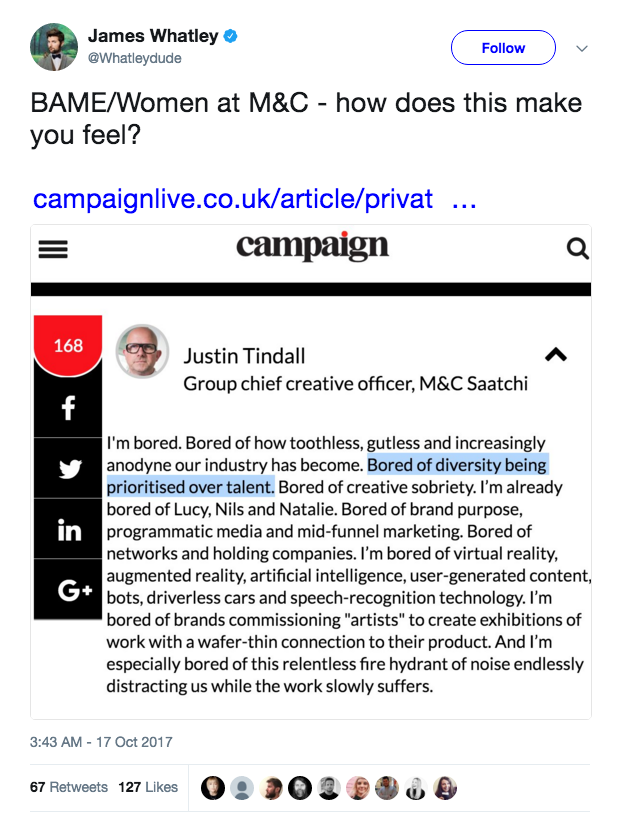 However, the powers that be at M&C Saatchi have quickly distanced themselves from Tindall’s comments, saying the agency is committed to diversity.

And, as you’d expect, few people are jumping on board Tindall’s new movement.

Senior CMOs in the UK have slammed the comments. “Justin is seriously out of touch. This is embarrassing,” wrote Ford UK’s brand chief Musa Tariq to social media. The fabled Cindy Gallop reposted the column but changed “bored” to “scared” and added, “Probably reflects what many already think but haven’t actually written or verbalised it.”

While a woman who claimed she once worked for Tindall, Emma Brooke, wote: “This generic old-school ad man opinion is why so many women like me leave advertising. It’s too tiring to work with such inflated egos.”

However, Tindall did find a supporter in former OutSmart CMO, Alan Brydon, who posted: “Shouldn’t talent be the prime determinant of recruitment and career development?”