The Verdict might not be the cracking success that Nine hoped for, but at least one good thing has come out of the Q&A spin-off: Mark Latham has admitted he is behind the Twitter account which trolled high-profile female journalists.

Here are just some of the harassment @TheRealMarkLatham dished out: 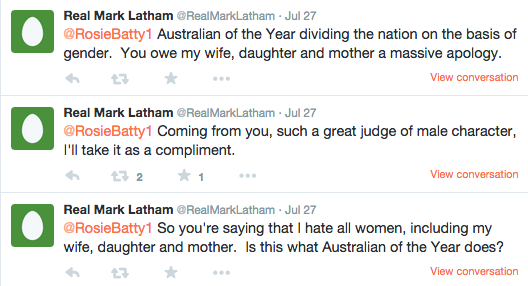 @leighsales The glorification of drugged out womanising. Is this what feminism really stands for?

@Tara_Moss Need fewer words, more glam photo shoots on this site pls. Your life 24/7 in Vogue, then lecture suburban mums down your nose

Latham flat out denied he was behind the Twitter account, claiming he was “Bachir Mustaffa, taxi driver extraordinaire, writing these Tweets with my one good arm.”

The second episode of The Verdict lost 153,000 viewers, posting a metro audience of 369,000, according to OzTAM figures. During the episode, host Karl Stefanovic questioned Latham on his social media activity. Stefanovic asked “Was the real Mark Latham #TheRealMarkLatham?” and if he had to resign from the Australian Financial Review because of his past Twitter account:

In response to Stefanovic’s questions, the real Mark Latham said:

“In November last year and again in January this year, The Australian reported that I was tweeting, and from that point on it became a case study of a bunch of silly journalists and some other people beating themselves up on Twitter with ‘is @therealmarklatham the real Mark Latham?’