A brave man who reportedly has the smallest penis in Britain is the face of a new campaign that advertises home blood test kits and comes with the slogan, “There’s nothing wrong with a little prick”.

Fifty-year-old Ant Smith is so proud of his small appendage he’s written the self-help book The Small Penis Bible for other men worried about the size of their own downstairs accoutrements. 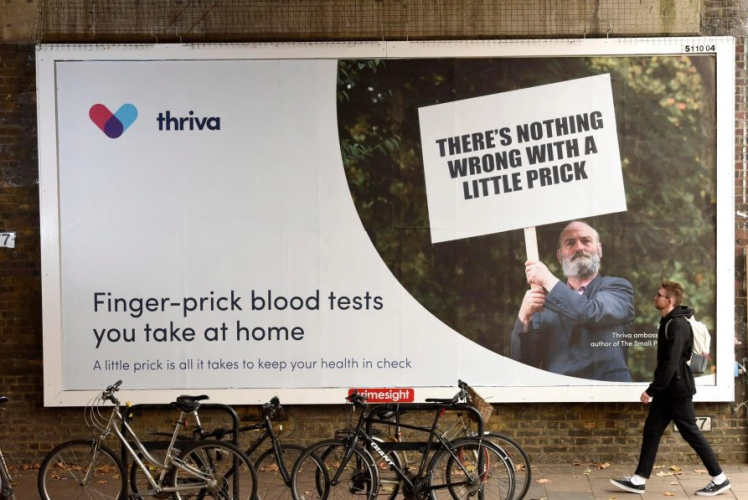 Smith reportedly sports a “micro penis”, which is the official term for any man’s genitalia that is less than seven centimetres in an excited state.

And now his public admissions have seen Smith get his big break as the face of blood-testing company Thriva’s new marketing initiative.

An out of home campaign shows Smith handling a huge pole bearing the “little prick” message.

The campaign advises how people can use a kit to take a finger-prick test at home to test for things like cholesterol, liver function, iron and vitamin deficiencies.

Smith told the UK’s The Metro: “This campaign with Thriva is the perfect way to spread the word about preventative health, good mental health and good physical health, what’s on the inside of the body, not just the outside.

“While playful, it’s a serious message, we will all be better off if we properly monitor what’s happening inside our bodies that we perhaps can’t see in the mirror.

Growing up it was a considerable embarrassment to me. At about 3.5in it wasn’t so small but seemed so much smaller than everyone else’s.

“I was teased at school and it made me so self-conscious I didn’t have sex until I was 21. I would get embarrassed if the condom slipped off as my penis was too small to keep it on. It isn’t something you can openly discuss with your friends, even though so many men have a hang-up about it.

“Somehow the size of your penis has become linked to how much of a ‘man’ you are, which is nonsense,” he said.