In one of the media clangers of 2017, mums website Mamamia has labelled a guest on its podcast show as “super morbidly obese” and then pondered: “Can she fit into the lift?”

The clanger, the work of Mamamia’s founder Mia Freedman (below), centred around a podcast interview with American author and feminist Roxane Gay (in main picture) who is in Australia to promote her latest book Hunger: A Memoir of My Body. 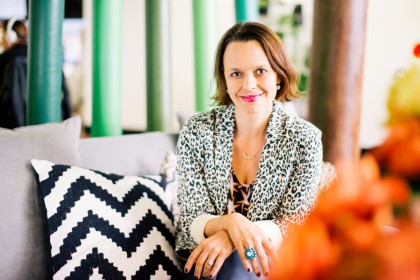 Gay, who has gained international fame for talking about her size and battles with overeating, has labelled Mamamia’s exchange as “cruel and humiliating”.

Mia’s mea culpa all began prior to the interview when Freedman decided to post details of the preparations for Gay’s visit to the Mamamia offices.

“A lot of planning has to go into a visit from best-selling author Roxane Gay,” read the description on the podcast episode.

“Will she fit into the office lift? How many steps will she have to take to get to the interview? Is there a comfortable chair that will accommodate her six-foot-three, ‘super-morbidly obese’ frame?” 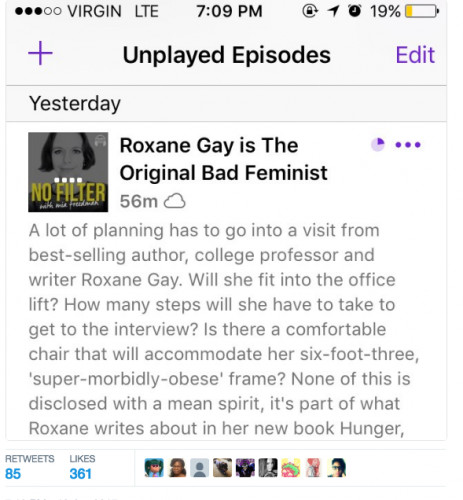 “I estimate that there were a dozen exchanges back and forth between my producer and her people and the details of them both broke my heart and opened my eyes,” Freedman said.

“Now, I would normally never breach the confidence of what goes on behind the scenes of organising an interview, but in this case, I’ve thought a lot about it and the fundamental part of her story and what her book is about. She writes about it in the book, I’m sure she won’t mind me telling you any of this.

“Her size is incredibly imposing. This is a logistical nightmare for her, there’s no other way to put it. The requirements that we had to go back and forth with her publishers … were extremely detailed.”

“There was also a lot of talk about chairs – making sure we had one sturdy enough that would both hold her weight and make sure she was comfortable for the duration of the interview.” 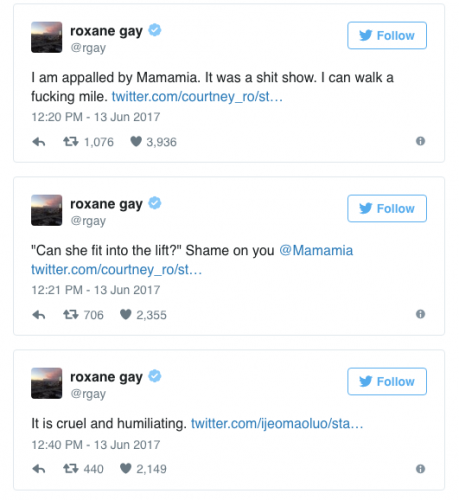 When Gay realised Freedman had leaked the details of the preparations of appearance she was livid, tweeting: “I am appalled by Mamamia. It was a shit show. I can walk a fucking mile.

“Can she fit into the lift?’ Shame on you @Mamamia. It is cruel and humiliating.”

Mamamia has since apologised saying it was “deeply apologetic that in this instance we’ve missed the mark in contributing to this discussion”.

You can read the full apology below:

As a publisher that’s championed body diversity and representation in the media we’re deeply apologetic that in this instance we’ve missed the mark in contributing to this discussion. We believe the conversations sparked by Roxane’s book are vitally important for women to have, and are disappointed our execution hasn’t contributed in the way we intended …

In no way did Mamamia ever intend to make Roxane Gay feel disrespected and we apologise unequivocally that that was the unintended consequence, including to her publishing team who organised the visit and made the requests in good faith. We are mortified to think she would ever believe this to be the case or that we have upset someone we so deeply admire and respect.

As soon as we became aware of her feelings about it, we took down the written post, edited the podcast intro and changed the podcast description to remove all references to the questions asked by her publishers and about details she said she found upsetting.