A new study has uncovered some of the problems around gender representation in YouTube advertising.

The research, which was completed by Google and the Geena Davis Institute on Gender in Media, found that the speaking time for female characters in YouTube ads was just 40 per cent, meaning men were heard 1.5 times more often.

Additionally, of the 2.7 million videos analysed by Google’s algorithms, male characters were seen 56 per cent of the time, compared to 44 per cent for females.

Despite the imbalance in terms of representation, the research found that when it came to effectiveness, there is a demand for inclusive content.

Women-led and gender-balanced videos yielded 30 per cent more views than other videos.

“Our analysis shows that gender bias in advertising is compounded by age bias,” said the Institute in the research. 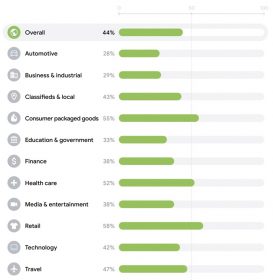 As well as the broad analysis, Google and the Institute also looked into the top 100 viewed global ads across 11 different advertising sectors.

“Female characters are significantly more likely to wear revealing clothing than male characters, and are shown more often in the kitchen, shopping, and cleaning,” the research states.

“In contrast, male characters are more likely to be shown driving, working, outdoors, and attending a sporting event.

“Male characters are also more likely to be shown working and in leadership positions.”