Advertise with us
Posted 9 February, 2016


Three quarters of the UK want a ban on junk food advertising before the 9pm TV watershed, according to a new YouGov survey published by Cancer Research UK.

The survey of more than 1,700 people found almost seven out of 10 respondents said there should be cuts to junk food advertising online while 66 per cent want reductions in junk food promotions, such as buy-one-get-one-free deals. 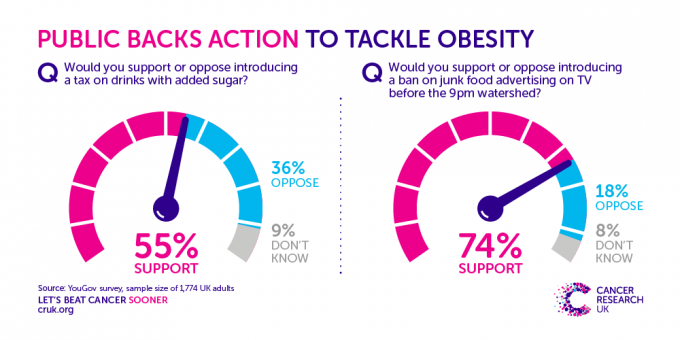 Alison Cox, director of cancer prevention at Cancer Research UK, said: “Junk food is everywhere. Children are bombarded by advertising tailored to tempt them with pretty colours and cartoons which all influence the food they prefer.  At a time when junk food is cheap and packed with extra calories, we need stronger action to help prevent children from choosing these foods.

“We want the Government to ban junk food adverts on TV before the 9pm watershed, put a tax on sugary drinks and enforce targets for reducing the amount of fat and sugar in food. Reducing obesity rates could save the NHS billions of pounds.  And, ultimately, we owe it to future generations to reduce preventable disease caused by being overweight and obese.”

Dr Julie Sharp, head of health information at Cancer Research UK, said: “To give children the best chance of a healthy future, we need to make sure there are plenty of healthy options available to them.  But this is difficult when they’re exposed to lots of cheap junk food.

“Obese children are more likely to be obese as adults, which in turn increases their risk of developing cancer in later life, along with many other health problems. So it’s important that young people are encouraged to eat healthily and keep active and that healthy choices are easy to make.

“Obesity is the biggest preventable cause of cancer after smoking and is linked to up to 10 different types including breast, bowel, and pancreatic cancer.”