Taking out a full-page in today’sThe Australian, some of the country’s biggest businesses have declared that “corporate Australia supports marriage equality”. 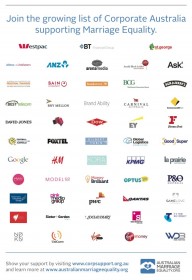 These supporters, along with many more, have signed a letter of support calling for marriage equality to be legislated by Australian parliament.

Rodney Croome, national convener of Australian Marriage Equality, said,“I applaud Australia’s business community for its leadership on marriage equality, and for the powerful message it is sending to our federal representatives about moving forward quickly on the reform.

“The business community’s support for marriage equality reflects the importance it places on treating all staff and customers with equal respect, and of maintaining Australia’s positive reputation overseas.”

“The 72 per cent of Australians who support marriage equality will look with pride on those businesses who are reflecting their values, and expect parliament to do the same.”