It’s rare we host a playwright on B&T, but today we’re privileged to do just that. Here, Melbourne writer Ron Elisha (pictured below) offers his take on the whole Harvey Weinstein saga and, he predicts, some good may come of it yet…

I am a member of that rapidly disintegrating generation raised on reruns of Mutual Of Omaha’s Wild Kingdom – a TV wildlife series that commenced screening in 1963.

One of the things that most impressed me as a young viewer was just how wild the kingdom actually was.  The level of savagery unleashed by a marauding lion upon the last antelope left standing in God’s own high-stakes version of musical chairs was breathtaking. 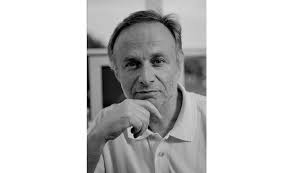 No quarter was given.  No mercy shown.  The efficiency of the killing machine had to be seen to be believed. This was the ultimate in the summary injustice that was (and remains) the hallmark of an uncaring natural order.

Equally lacking in the niceties one would normally associate with the creation of new life was the act of coition itself – every bit as harsh, violent, predatory and shockingly sudden as the kill – indeed, the very epitome of Hobbes’ immortal description of the natural state:  Solitary, poor, nasty, brutish and short.

No hint of romance.  No nod to consent.  No attempt at foreplay.  But just a desperate, frenetic chase culminating in a furtive, hurried, thrusting climax followed by immediate disengagement and uninterest.

These, we were told, were the alpha-males – the successful members of the gender, whose aggressiveness, single-mindedness and sheer, unalloyed violence would ensure that it was their insolent seed that would go on to populate an increasingly violent species.

And so we arrive, in the 21st century, at Mr Weinstein.

Should we be surprised at the forests of erect members that suddenly appear to stake out the upper echelons of our establishments?

Should we express shock at the fact that such echelons are almost exclusively inhabited by alpha-males?  Could they possibly be defined as alpha- if it were otherwise?

As much as we would prefer to imagine an alternative reality, what lies at the very core of success within the existing social, political and commercial structures of society is utter ruthlessness.  Which makes impeccable sense, given that these institutions have been shaped by the ruthless in order to better serve, protect and advance their interests,

One of the central reasons for the rise of Trumpism is our general disillusionment with the quality of candidate being thrown up by our political systems, which are widely (and accurately) seen as altogether corrupt.  Any decent or honest candidate will be weeded out long before they get within lobbying distance of the top.  (US Senator Michael Bennet recently commented that before entering the Upper House, he considered the TV series ‘House Of Cards’ to be somewhat exaggerated.  Having experienced the political process from the inside, however, he now finds the show’s portrayal of moral bankruptcy to be deadly accurate.  The level of ‘sociopathy’ exhibited by members of this august body beggars the imagination.)

So it should come as no surprise, then, when those who seize the reins of power – whether it be in Hollywood or in Washington DC or in any other centre of influence – exhibit the very traits that put them there.

Does this mean that sexual predation, bullying and various other forms of harassment and humiliation are an inevitable part of our social structure?

To a degree, the answer is a disappointing yes.  As long as our social structures are set up along patriarchal, hierarchical lines, power inequalities – which both encourage corruption and enable abuse – will persist.

Can anything be done to ameliorate the situation?

The answer is a tentative yes.  Tentative because it requires a long, hard re-examination of the way in which we function as a society, together with a preparedness to dismantle and reimagine the rotten structures at its epicentre – all of which takes time, effort, foresight and the social and political will to abandon the status quo.  A big (though not impossible) ask.

We are (for the foreseeable future) stuck with alpha-males.  As a delta-male I, for one, would be more than happy to see the back of them.  But that’s not about to happen.  So we need to look at a restructure of our institutions that renders alpha-male-ism a disadvantage.  We need, in other words, to dis-incentivize aggression, ruthlessness, opportunism, thoughtlessness, lack of empathy and corruption.  This cannot be achieved through legislation alone.  It must involve a total systemic restructuring which, as I’ve said, must spring from the groundswell of social and political will.

‘Geniuses’ have always been forgiven their foibles.  The Picassos, the Einsteins, the Tolstoys – we have always embraced the products of their genius at the expense of empathy for the embittered lives of those close to them.  We are asked to accept, for example, that the ruination of the lives of two women and two children was a small price to pay for General Relativity.  It was not.

A quarter of a century ago, the debate raged as to whether a philanderer and rapist could still be a good President.  The verdict at the time was that he could be.  Even today, many still argue that position – that a person’s private life has nothing to do with their ability to perform professionally.

The Harvey Weinstein Effect is the direct corollary of that take on the world.  You cannot separate the work from the life.

But, at the end of the day, it is we as a society who must begin to confront the reality of our origins and, as thinking, sentient beings, begin the arduous task of reshaping the way in which we order our affairs, so that one day, perhaps – starved of oxygen – the Louis CKs of this world will be an extinct species.

In the words of Thomas Huxley:  That which lies before the human race is a constant struggle to maintain and improve, in opposition to the State of Nature (my italics), the State of Art of an organized polity; in which, and by which, man may develop a worthy civilization, capable of maintaining and constantly improving itself.’