Fitness wear brand Lorna Jane is in the spotlight again, this time from former employee Vanessa Croll who claimed Lorna Jane used her.

Croll, who is a journalist for News Corp’s RendezView and worked at Lorna Jane around 10 years ago as personal trainer, penned her thoughts in response to Lorna Jane Clarkson, the founder of Lorna Jane, appearing teary-eyed on 60 Minutes.

In the interview – which you can watch here – Clarkson detailed how recent months have been trying with much bad press circulating around the brand.

The fitness brand has been accused of bullying overweight staff, posting an ad searching for a receptionist/fit model of a certain size, and refusing journos from a press event.

After seeing the interview, former employee Croll took to RendezView to call out Clarkson on her claims about feeling vulnerable and her “crocodile tears”.

“It is not good enough to say the media is doing the wrong thing by you in reporting on certain events,” wrote Croll.

“Just explain yourself and get on with it. Don’t play the victim and call out the press for the ‘things they are saying about’ you, which is exactly what Clarkson did in her interview on Sunday night.”

Once the story was published on Facebook, Lorna Jane responded in a comment, saying it hadn’t been contacted for comment or opinion for the article, and wanted to tell its side of the story. 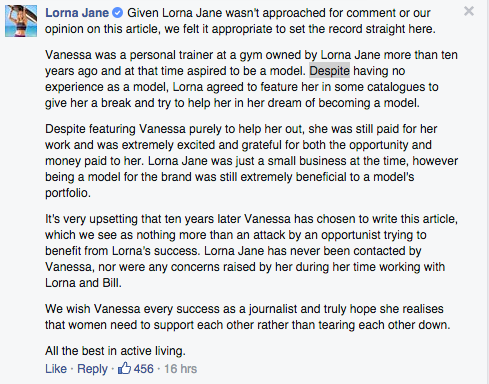 B&T has contacted RendezView for further comment, but had not heard back at the time of publication. Lorna Jane replied to B&T’s request for comment with the statement above.

Replies to the Lorna Jane comment on Facebook have some claiming it’s a bad PR response, a “nasty” response, and surprise the brand would choose this method to set the record straight.