The French sports magazine dedicated the latest edition of its weekly magazine to fighting against homophobia in sport by featuring the two sportsmen kissing alongside the title: “Kiss whoever you want.”

While the picture is from the film The Shiny Shrimps, the anti-homophobic sentiment is still powerful, especially in the wake of disgraced Wallabies and Waratahs star Israel Folau’s homophobic comments on social media. 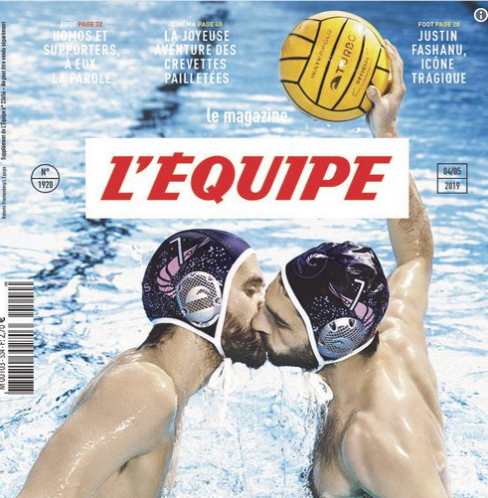 Folau is currently fighting Rugby Australia to retain his $4 million contract after the organisation decided to sack the player over his homophobic comments on social media last month.

Now, popular French sports publication L’Equipe is sending a strong message to Folau and anyone who believes anti-gay behaviour has a place in the sporting industry.

The latest issue of the magazine, released over the weekend, features pieces on past anti-gay attacks on sporting stars, including the 2018 homophobic assault of former Welsh rugby captain Gareth Thomas and the story of the gay footballer Justin Fashanu who died by suicide.

In the editorial, L’Equipe also blasts the “the stream of abject words, uttered, among others, by a well known Australian rugby player.”

Folau is slammed a second time in the magazine in an article where L’Equipe sheds light on anti-gay incidents that have occurred in sport over the years.

Playing in France is a popular option for many Aussie rugby stars, especially later in their careers.

However, should Folau’s lose his RA contract, it’s safe to assume he will not be welcomed in the world of French rugby following L’Equipe’s spread.

The magazine also said Folau has contributed to a “social and cultural crisis” that has consumed the Wallabies mere months out from the World Cup.

Ironically, way back in 2014, Folau posed on the cover of the prominent gay magazine Star Observer denouncing homophobia in sport.

The rugby star appeared alongside fellow Wallaby, Adam Ashley-Cooper, alongside the cover line, “Big Boys And Their Balls.” You can read B&T‘s reporting here.

Folau’s actions are certainly divisive, as some Pacific Island players have supported Folau and the idea of religious freedom, while many of his teammates have expressed their frustration and disappointment at Folau for the storm he has created.