Deloitte’s chief edge officer, Pete Williams, didn’t hold back in his keynote presentation this morning at B&T’s DAZE of Disruption conference in Sydney, with KPIs, big data and blockchain all in the firing line.

Williams began his talk by emphasising the fact that businesses have to learn faster to move faster in these times of exponential change.

“The thing I’m finding a lot is that big companies, particularly in the digital space, have come from an environment we’re things move relatively slowly so they can take a long, considered look at scoping and planning, he said.

“Being slow is not an option, and our responsibility is to lift people up to that gap and get people used to the notion of speed, because when we’ve got this relentless tempo of change, you’ve got to get into this tempo of innovation that keeps up with it.” 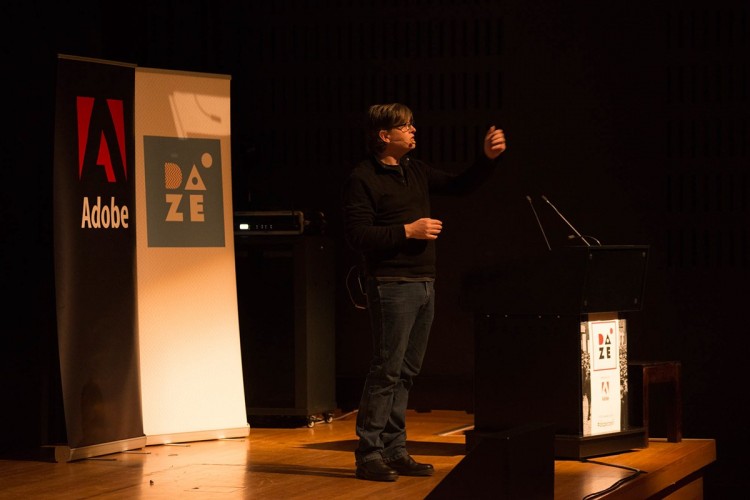 “We’ve got talent, we’ve got a fantastic market, we’ve got the same access to bandwidth and infrastructure that everyone else has got. Stop whinging and start doing.”

“One of the things I notice a lot in our industry is we spend the vast majority of our time in this product performance and product system area – the offering,” he said.

“But if you really want to smack innovation out of the park, you need to be thinking how we configure – how do we make money out of it, what sort of networks are we creating and tapping into. Also, what’s the structure – are we owning all the people of the assets.”

Williams was critical of agencies in this aspect, noting that they don’t spend enough time thinking about their business model, and said a lot of large organisations need to get over the notion of thinking like a start-up.

“You’re not a start-up, he said. “You need to be thinking not minimum viable product, but minimum viable transformation – where’s the opportunity to test a completely new business model.”

According to Williams, a lot of people are spending time zoomed into their businesses.

“KPIs in my view are one of the worst things ever invented because they get people to focus like point-operated ponies rather than looking at what’s really going on,” he said. “Once a week, zoom out and look at the bigger picture.

Williams said that while there is so much noise around the importance of big data, most organisations haven’t even scratched the surface of their own small data.

“If want to get going, start to think about what data you’ve got and can get and manufacture to start coming up with really great ideas” he said.

“You’ve also got to think about how to use that data. You need to stop thinking how you can flog something to somebody that they don’t want, and start thinking about giving them as much data as you have and helping them.”

Williams also warned businesses to be aware of new technology, but not to get sucked into it just because it’s there.

“Blockchain for me would be the number one on that hit list,” he said.

“Most of the stuff that people are talking about when it comes to Blockchain is complete and utter bullshit. Blockchain creates a time-ported, time-stamped series of transactions so you can’t double-spend a digital currency. It will not solve world peace. It will not end poverty.

Finally, Williams discussed the direction that Deloitte is going when it comes to working with emerging technologies, revealing that the company today bought virtual reality company Kid Neon.

“It’s this notion of how we’re constructing models using the digital world that people can understand and interact with, he said.