You have to hand it to Kendall Jenner, she’ll endorse anything, despite the global outrage that often comes with it.

Fresh from her Pepsi ad debacle that was labelled possibly the worst ad of all time and had to be pulled after just 24 hours, comes the young Jenner’s latest stink.

Once again she’s scored herself a coveted Vogue cover, this time celebrating the magazine’s 10th anniversary in India. And, yes, cue the inevitable naysayers raging over an American model appearing on an Indian magazine. Check out the cover below: 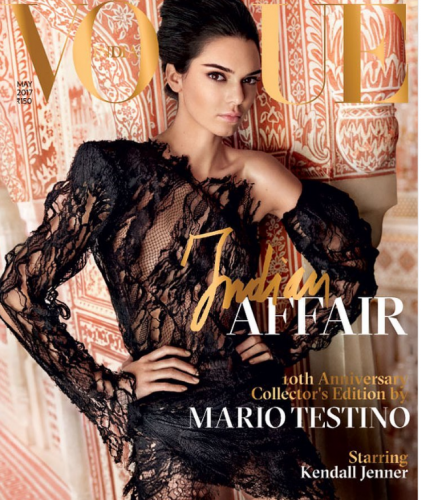 Readers were quick to tweet their displeasure that an Indian model had not featured in the shoot which was apparently shot in Jaipur by famed fashion shooter Mario Testino. The magazine itself, nor Jenner, has publicly responded to reader complaints.

However, others have deemed the shoot even more sinister, suggesting Indian woman aspire to western ideals of fashion and glamour. One commentator calling the shoot Indians’ “hunger to become more westernized”.

Jenner is no stranger to Vogue or controversy for that matter. The 21-year-old has done no less than six international covers for the magazine including the US, Japan, Spain, Australia, Germany and now India.

Her cover for the famed September US edition last year caused similar outrage after fashionistas raged that such a prestigious honour shouldn’t go to a member of the Kardashian clan.