Karl Stefanovic repeatedly denied he’d done a deal with any media company for the rights to his wedding over the weekend, but Who magazine’s latest issue appears to tell a wholly different tale.

The Nine frontman and Today host married his younger bride, Jasmine Yarbrough, in a lavish ceremony in Mexico on Sunday. 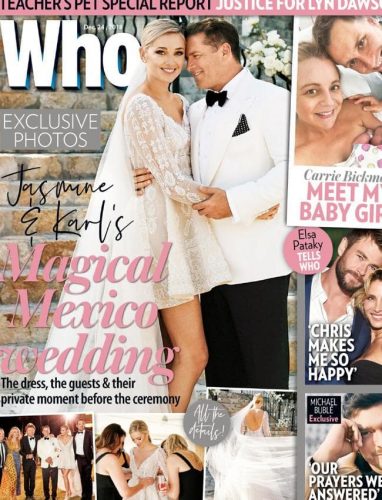 The latest issue of Who includes the beaming couple on its cover alongside the cover line, “Jasmine & Karl’s magical Mexico wedding” and includes nine pages of coverage and pictures inside.

Ironically, Who is part of the Pacific stable which is owned by Seven West Media and Nine’s archest of foes.

Back in February, Stefanovic used an interview in Nine’s The Fix to deny rumours that Yarbrough was pregnant and that he was planning to sell the rights to his wedding.

“And there is no media deal. Don’t believe everything you read, unless it’s here,” Stefanovic told the website.

It’s unclear how much Who forked out for the wedding snaps. However, a mole at Pacific told B&T that it “probably cost us jackshit” (meaning very little).

Interestingly, celebrities have granted Who exclusives in the past for the title’s reputation of being one of the cleaner and more ethical amongst the women’s glossies.

Apparently, Who managed to score the coup as the magazine’s editor, Keshnee Kemp, is a lifelong friend of Yarbrough’s. Kemp also attended the wedding over the weekend.

In the editor’s letter in the issue, Kemp said: “I’ve known Jasmine and her family my entire life. We grew up together in Queensland.”

The latest issue comes as another Stefanovic is embroiled in an ugly stoush with another of Pacific’s titles.

In the alleged interview, Thorburn reportedly called Yarbrough a “fake person who lives in this fake castle,” adding she’d “done a lot of reading about narcissism”.

On Tuesday, Thorburn appeared on 10’s Studio 10 denying she’d ever given an interview to New Idea.

“I did no interview with New Idea. There was no interview,” Thorburn told the Studio 10 panellists and insisted the magazine had “made them up”.

To muddy the waters further, yesterday a The Daily Telegraph investigation into Thorburn’s claims found that she had indeed given an interview to a journalist called Jonathan Marshall while waiting for a plane at Sydney Airport.

The Tele claimed it had “verified irrefutably” that Thorburn had indeed spoken to Marshall “on the record” and the quotes were indeed hers.