It includes the addition of a dedicated Women of Style vertical, featuring profiles of the women recognised by InStyle‘s premier awards program, Women of Style, held in May each year.

Prior to this, the vertical was only live for four months of the year.

To celebrate the change in format and aesthetic, InStyle has partnered with comedienne and Australian Instagram star Celeste Barber, most famous for her parodies of influencer images.

Barber appears on InStyle‘s March cover as well as in snackable social videos, a digital cover and a mini film that will be seeded across InStyle‘s digital platforms. 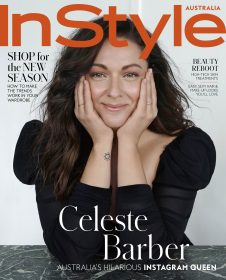 InStyle editor Emily Taylor said: “Putting Celeste on the cover was a bold choice but we firmly believe she represents the changing face of luxury.

“Celeste’s one woman who has really made me laugh and rethink what’s real in the last 12 months or so.

“And not just me: Hollywood heavyweights and fashion’s inner circle – ahem, Tom Ford – can’t seem to get enough of her down-to-earth humour, either.

“So, it was a no-brainer to ask her to partner with us for this milestone edition and Celeste’s first glossy cover”.

2018 marked the 10th year for InStyle‘s Women in Style awards in partnership with Audi Australia.

The campaign for last year’s awards was #DriveProgress, celebrating past winners and recognising where each has driven positive change through their own personal commitment to their respective fields.