While it was originally believed the account was made by a dad to prove to his daughter anyone can be an influencer, it turns out the popular account is actually a marketing stunt created by a small coffee shop.

The construction worker named Omar from Austin Texas, shot to fame for being an ‘anti-influencer influencer’, with his account currently standing at a large 412K followers.

The account, which was created a month ago, pokes fun at influencer culture and quickly caused quite a stir amongst social media users.

However, Omar doesn’t actually run the account and in fact, doesn’t have much to do with it at all.

The account is the brainchild of Mike McKim, the owner of Austin’s Cuvée Coffee.

McKim told BuzzFeed News the idea for the account came from a “creative brainstorming session”.

“We need a different type of influencer: a hard-worker, blue-collar guy.”

McKim then partnered with ad agency Bandolier Media to create the “Omar” persona.

While he didn’t reveal Omar’s last name, McKim said he is a real construction worker in the area. 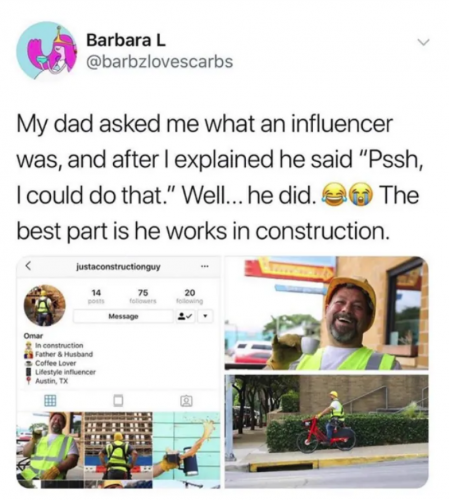 The tweet claimed Omar was their father and spun the story that he created the account to prove he could become an influencer.

McKim said he didn’t know who was behind the tweet about the fake story.

The false tweet soon went viral after it was shared across multiple platforms and websites, including Reddit’s r/wholesomememes community.

Coffee art in a thermos cap? Might be a first! Thanks to fine folks at @cuveecoffee for being good sports. ☕️🎨

Despite it only recently coming to light the account is just one big ad, there were actually several indicators that proved the account was a marketing stunt for Cuvée Coffee.

While some of Omar’s posts include #sponcon tags to mock influencer posts, Cuvée Coffee is tagged and mentioned in several of the posts on the account.

Not to mention “Coffee Lover” is listed in the bio of the page.

B&T doesn’t know what to believe anymore. Next someone will be telling us Egg Boy was a marketing ploy from Sunny Queen eggs.