Advertise with us
Posted 6 February, 2019

And that brings us to a report out of Argentina earlier this week. Weather presenter Sol Perez was giving her meteorological predictions live-to-air to local network Gente Opinando when she soon realised a member of the public was apparently filming her derriere on his phone.

Perez, clad in a pair of skimpy denim shorts, quickly chastens the balding bystander: “Sir, what are you filming?”

To which he replied: “I am sending this to my workmates.”

Perez then adds: “Okay, but what were you recording? Because I had my back turned. The guys there (in the studio) saw that you were filming things that were not okay to be filmed.”

He responds: “And are you going to let me stand over there to film?”

However, not everyone is siding with the 25-year-old who, her TV duties aside, is also a famous Instagram model, regularly posting provocative images of herself (and her bottom) to social media to her, not insignificant, four-and-a-half million followers. 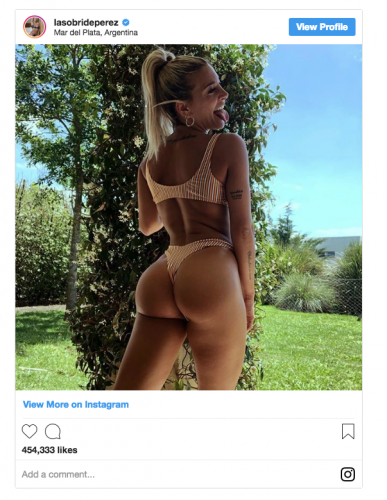 One person, going by the name LuisPaoloRossi, wrote online: “Why does she constantly promote her bum on social media if she does not want it photographed? Or is he expected to pay her for copyright?”

While another respondent, going by the name NeuquinoNyc, added: “She is famous for showing off her bum and is then bothered by something like that! It’s like Lewis Hamilton complaining about speed.”

In her defence, someone called ‘MarulaMora’ wrote: “The guy did wrong.”