Nine CEO Hugh Marks has played down media reports over the weekend that Today host Karl Stefanovic was “gone” and would be replaced following plummeting ratings at the breakfast show.

Yesterday’s The Sunday Telegraph reported Marks himself was “tipped to move Stefanovic on this week – a move which one insider says has been on the agenda for several weeks.”

Last week, Today had the ignominy of falling under the 200,000 viewer mark with arch-rival Sunrise boasting a 70,000 viewer lead.

Speaking to The Australian – Nine’s only public comment following the speculation over the weekend – Marks agreed that the ongoing negative press surrounding Stefanovic’s personal life had proven an unwanted distraction.

Marks said it has been a “tough and challenging year” for Stefanovic before adding: “No doubt the constant publicity surrounding issues with his personal life have had an impact on Karl, his colleagues and on the show. We can’t hide from that. And as a result we know there’s a lot of hard work to be done to win back the audience.

“We stick by our people at Nine and we’ve put the challenge on the Today show producers, the presenters and, especially, on Karl to regain the trust and loyalty of our audience. And I have every confidence they will do it,” he told The Oz.

Marks also dismissed rumours of tensions between Stefanovic and fellow Today host Georgie Gardner. “When they’re working as a team, we believe they’re among the best going around,” he said. 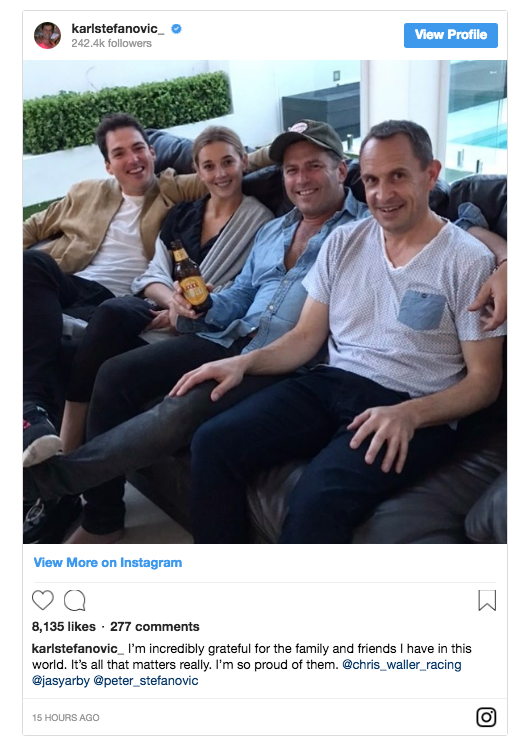 For his part, Stefanovic appears to be playing down the rumours he’ll be punted by Nine bosses.

Last night, the 44-year-old posted an Instagram photo of himself enjoying a beer alongside his fiancee Jasmine Yarbrough, brother Peter and family friend Chris Waller. The image came with the caption: “I’m incredibly grateful for the family and friends I have in this world. It’s all that matters really. I’m so proud of them.”