Here, There & Everywhere (HT&E) has announced it has entered into a joint venture with IKON Media & Entertainment to create a new division and brand.

HT&E Events will enhance the complementary nature of HT&E’s existing radio, outdoor and digital businesses by providing unique content that is targeted to the group’s audiences and is highly relevant for brands.

A competition for enthusiasts at all levels – from the amateur at home, to the esports professional – it will for the first time offer a clear pathway between the two, as amateur players earn the right to compete alongside seasoned professionals.

The Elite Series will see city-based franchise teams compete weekly at dedicated esports venues, with each event broadcast live online and across other TV and media platforms.

As well as The Elite Series, a new online competition, The Challenger Series, will launch in the third quarter of this year.

Open to all gamers, the Challenger Series will be the battleground for amateur players to compete against each other, to win the chance to play alongside the pros in The Elite Series.

Selection for The Elite Series will take place via a player draft, where the top-ranked amateur competitors from The Challenger Series will join professionals in a player pool, from which team owners will be asked to select their squads for the upcoming seasons.

Each squad will have a defined number of professional and amateur players and be managed within fixed salary caps.

The founding franchise teams for Australia’s first city-based professional eSports league, commencing in the summer of 2018 will be the Adelaide Photonics, the Brisbane Deceptors, the Melbourne Metattak, the Melbourne Rebolte, the Perth Subnets, the Sydney Blue Surge, and the Sydney Opsydian. 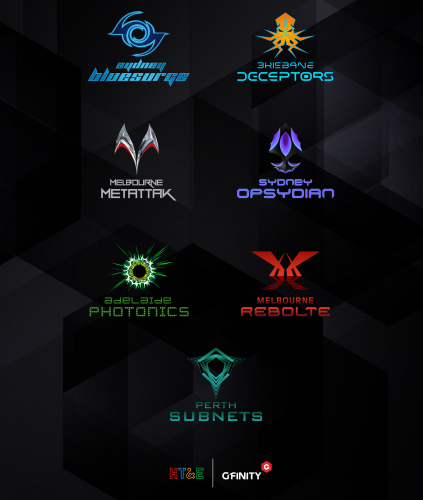 HT&E chief executive and managing director Ciaran Davis said: “We are very pleased to be partnering with IKON Media & Entertainment under the new banner of HT&E Events, which will house the esports business and manage other niche events for Australian audiences.

“IKON bring to the table a depth of understanding and expertise in delivering experiences in sports, entertainment and media, making them the perfect partner as we move into this new area.

“The global eSports market has seen substantial growth in recent years, and we’re really excited to be entering this space with an established, world-leading esports business, Gfinity.

“This move supports our strategic objectives to diversify revenues and expand our audience base, and we see in this opportunity the potential to reach a younger audience base and drive growth for HT&E.

“Leveraging our unique combination of media assets, and using Gfinity’s tournament platform, Gfinity eSports Australia will also be perfectly positioned to run bespoke events for sponsors and strategic partners looking to engage with the esports community – a highly engaged audience that will continue to grow.”

IKON Media & Entertainment partner Damien O’Donohoe said: “We are thrilled to be teaming up with HT&E under the HT&E Events umbrella.

“IKON is passionate about creating engaging and original content, and HT&E’s portolio of existing assets is a powerful platform from which to launch this exciting new joint venture and will ensure that brands and businesses can capitalise on this new content.

“We are also delighted that our first venture together involves working with Gfinity, a global leader in esports, to launch Australia’s first city-based professional esports franchise league.

“The opportunity presented by the rapidly-growing esports sector is tremendous, and we have carefully chosen Gfinity as our platform partner to ensure the player and viewer experience is best in class, and to differentiate ourselves in the Australian esports market.

Gfinity plc CEO Neville Upton said: “Gfinity is truly passionate about esports, and we know that passion is shared by gamers and fans across the world.

“We are very excited to be partnering with HT&E and IKON to bring a professional eSports league to Australian audiences.