One of the world’s biggest brewers, Heineken, has unveiled a new no-alcohol beer that it hopes will tap into a new breed of health and weight conscious drinkers who’d prefer not to get drunk.

The new beer, known as Heineken 0.0, was unveiled at the Spanish Formula One over the weekend and the brewer is hoping it will make it a major player in a segment of the market growing at five per cent per annum.

Heineken 0.0 even comes with a TVC campaign unveiled over the weekend:

And no-booze beer comes with far less tax, which Heineken hopes will allow it to play in the soft-drink market space and offer a beverage that it believes is far healthier to many sugary juices and fizzy drinks on the market. A 0.0 reportedly has half the calories of a can of Coke or full-strength beer. 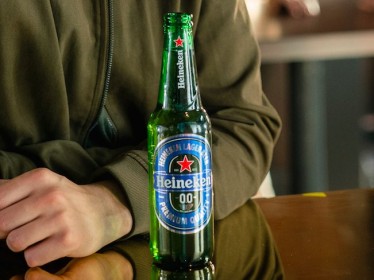 Heineken will target Europe, Russia and the middle-east with 0.0 and, (some might say thankfully), there doesn’t appear to be any news of the booze-free beverage coming to Australia anytime soon.

News of Heineken’s move comes as the planet’s biggest brewer AB InBev, makers of the likes of Stella Artois, Corona and Budweiser, announced plans that a quarter of its beers would be low or alcohol free by 2025. Low alcohol tends to mean any beer under 3.5 per cent.

According to Heineken brewmaster’s Willem van Waesberghe the reason most no-alcohol beers has failed in the past is they’ve tasted awful.

However, for 0.0 the brewer has created two separate brews with different qualities, then removes the alcohol and blends them together.

“Both beers are not nice. You need to blend them together to make a good beer,” van Waesberghe said.