If the latest figures from Roy Morgan Research are anything to go by, Aussies are embracing printed magazines more and more every year, with digital channels proving a useful extension of the print brand.

Food & Entertainment was once again the best-performing category overall (with the combined reach of included titles growing 17.1 per cent).

But what are the top 20 most-read magazines YOY?

There’s been a shake-up in the order of the top 20 most-read magazines since the previous Readership result in June. 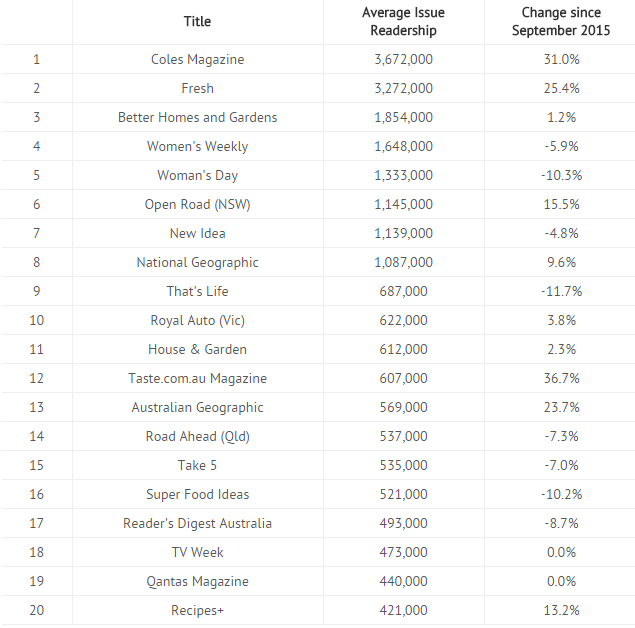 The two major magazine publishers battle it out for the top spots in cross-platform readership. Better Homes and Gardens is the most-read paid-for magazine overall with 2,125,000 readers in print or online, ahead of Australian Women’s Weekly with 1,975,000.

Digital has brought new readers to magazine brands. 388,000 read Better Homes and Gardens via digital—70 per cent of whom are additional: people who don’t also read the magazine in print. Four in five digital readers of the Australian Women’s Weekly ’s 411,000 readers via website or app are non-print readers.

Michele Levine, CEO, Roy Morgan Research, said, “The continued success of both Coles Magazine and Fresh highlights the increasing influence of retailers in the media space.

“In a recent interview, Michael Scott from Myer considered all the ways you can interact with Myer as their “owned-media”. Roy Morgan Research shows marketers how all their different ‘media’ platforms—including magazines, websites, loyalty cards, and even store visitation—combine to deliver an unduplicated “total cross platform” reach.