A new report that looks at teenagers aged 14-21 (those born from 1995-2002) paints a rather bleak picture for this select band of Millennials and the challenges for marketers trying to target them.

The report titled “Generation K” (named after Katniss Everdeen from the cult series The Hunger Games) was authored by Briton Noreena Hertz (pictured below) an economist who also sits on the board of Warner Music and involved interviews with over 2000 American and British teens. 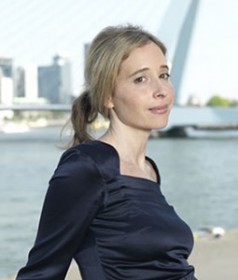 Hertz – who spoke at last week’s Advertising Week Europe in London – said the Ks are permanently switched on, multi-screening and multi-tasking.

And they’re certainly not a segment marketers and brands should ignore. According to Hertz, the Ks are worth €150 billion ($A226 billion) per year in Europe, The Middle East and Africa alone

According to Hertz’s recent London speech, and reported on Insider Business, the three distinct forces that shape Gen K are:

TOUGH ECONOMIC TIMES: When the GFC hit in 2008 the Ks were aged from six to 13 and, many would argue, the world’s never really recovered. They have been “shaped by an environment of job insecurity, rife inequality, and a sense of fear about their economic futures,” Hertz said.

TERRORISM: It’s become a daily part of life and Hertz believes the Ks are forced fed a daily diet of global terrorism that is a “growing sense of existential threat.” Hertz concedes it’s unlikely that they will experience a direct threat themselves but have grown up on “terrorist attacks, beheadings, and bombings” via their smartphones.

THE FIVE TRAITS OF GENERATION K

LONELINESS: Despite being constantly connected the Ks actually crave face-to-face connection. Four out of five would prefer to meet friends than engage with them via social media. “Physical interaction comes at a premium in this digital world,” Hertz said.

DISTRUST OF TRADITIONAL INSTITUTIONS: According to Hertz, 60 per cent of adults trust the big corporations. For the Ks, that’s a measly six per cent.

GENEROSITY: Hertz said: “This generation volunteers more, campaigns more, and gives more money to charity as a percentage of their income than any other generation. Ninety-two per cent believe it’s important to help others in need. They really care about inequality.”

CREATIVITY: The Ks love to make things – music, art, food, whatever – and typically via their iPhones’ app. The Ks “seek creating and co-creating as a way to have agency in this kind of confusing world,” Hertz concluded.