Five young filmmakers have been selected as the finalists of the first IGTV Film Festival, which is now open to audiences at the Sydney Film Festival Hub.

The finalists’ films cover a diversity of genres, perspectives, and experiences—all submitted in vertical video format on IGTV.

Open nightly at the Sydney Lower Town Hall, the IGTV Film Festival invites the public to attend the Sydney Film Festival (SFF) Hub, where they can view all the finalists’ films and vote for a People’s Choice Award.

One winner will be selected next week by an industry jury including Nashen Moodley from Sydney Film Festival, Zaac d’Almeida from Instagram Australia, and Katy Roberts from VICE. 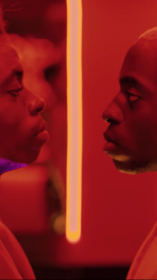 The competition received an overwhelming number of submissions from all over Australia, telling unique stories and sharing experiences from an array of diverse perspectives. The finalists:

Synopsis: A re-telling of the myth of Narcissus, set in modern day Australia. How do we perceive ourselves in this day and age and beyond? Technology is ever present, and in a world of social media, what is your true identity?

Synopsis: YAYALAND is about how interpreting the youth, struggles, and melancholy around us can give birth to colourful imagined worlds in which we inhabit.

Synopsis: Matios is a young Ethiopian refugee living in Tasmania with dreams of becoming a professional soccer player.

Synopsis: Intercepting the IGTV airwaves to deliver a message. In the future, a virus spreads through screens infecting everyone online… It takes away the power of peoples’ ability to talk or hear. One girl intercepts with a new way of communicating, a new language that comes from the body based on dance and movement. This is how they share their stories.

Synopsis: Daniel is a little nervous about proposing to Lucy, so he asks his phone to figure out if it’s a good idea.

The theme for this year’s IGTV Film Festival is ‘Future’, and entrants were encouraged to share a sense of what it’s like to live in Australia today, and what it might be like in the years to come—whether it’s the environment, identity, politics, food, or sport.

At a Festival event next week, one winner will be selected by an industry jury and will receive an official Sydney Film Festival award, $2,500 worth of film equipment hire from Panavision, and $5,000 prize-money.

There will also be a People’s Choice Award, to be presented after the festival.