Kellogg’s has taken out two of the five Shame categories in the 2017 Parents’ Voice Fame and Shame Awards. Recognised in the Digital Ninja and Smoke and Mirrors categories, Kellogg’s was shamed for promoting some of its most unhealthy products to children.

Now in their 13th year, the Fame and Shame Awards highlight the worst of junk food marketing to kids.

Kellogg’s’ Halloween partnership with Shazam received the Digital Ninja award for being the digital media campaign most obviously targeting children and driving active participation in the brand. “Kellogg’s has once again disregarded the health of Australian children by developing campaigns which target a young audience. The use of augmented reality technology, in conjunction with a Halloween campaign, is clearly designed to appeal to children,” said Alice Pryor, Parents’ Voice campaigns manager.

This year’s winners and losers included: 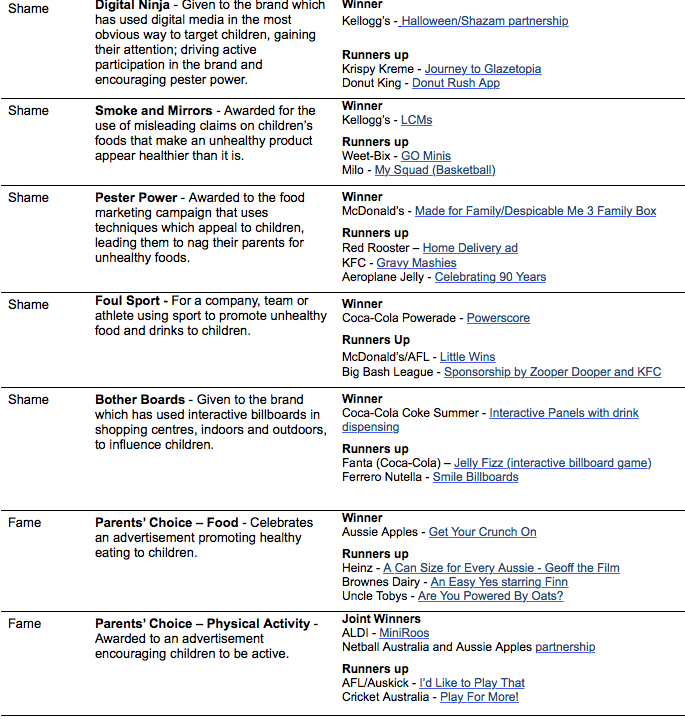 Kellogg’s also picked up the Smoke and Mirrors award for its LCMs commercial, making an unhealthy product appear healthier than it is. “Despite the featured LCMs bars scoring as low as 0.5 health stars, Kellogg’s has presented them as an appropriate everyday addition to lunchboxes,” Pryor added.

McDonald’s’ Made for Family/Despicable Me 3 Family Box commercial claimed the Pester Poweraward. Featuring a young boy wearing a minion bodysuit and visiting McDonald’s, the ad further calls into the question the motivations of a company found to account for 47 per cent of all unhealthy food advertisements on primetime television.

“Parents are increasingly frustrated that children are constantly exposed to products which are inconsistent with healthy lifestyles and indeed, sporting careers,” Pryor continued. “Sports drinks are not an essential part of being active. POWERADE ION4, featured in the ad, contains more than eight teaspoons of added sugar. This is almost the total daily allowance of added sugars for a 9-year-old child.”

Coca-Cola’s Coke Summer took out the final Shame award, becoming the inaugural Bother Boards recipient for using interactive billboards in shopping centres, indoors or outdoors, in an attempt to influence children. The billboard in question, by oOh! media, asks teenagers to use their phones to connect to the panel, throwing ice cubes at cans of Coke, with winners receiving a can dispensed directly from the panel.

While Parents’ Voice is dismayed by the range of the Shame awards this year, its members are equally pleased by the efforts of companies encouraging children to adopt healthier food and drink choices. This year, Aussie Apples took out the two major Fame categories, while ALDI and Netball Australia were also recognised.

In the Parents’ Choice Award for Food, Aussie Apples’ Get Your Crunch On campaign won from a strong field which included Heinz, Uncle Tobys and Brownes Dairy. The advertisement shows apples picked from trees placed in lunchboxes for school kids, who consume the fruit in the company of active dancers and netballers.