Fairfax Media has been handed a $15,000 fine by the Federal Court after the newspaper published a misleading advertisement for real estate company Domain.

The ad, which appeared in The Sydney Morning Herald on February 13, 2016, claimed Domain was the “#1 property app in Australia” and had “the most property listings in Sydney”.

The fine will be paid to Domain rival REA Group, which owns realestate.com.au, as Fairfax had told the court it would not publish misleading ads on February 12, 2016, the day before the ad in question appeared in The Herald. 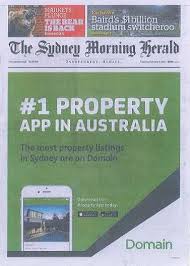 Speaking on the punishment, Justice Bernard Murphy said, “In publishing the print advertisement I consider Fairfax failed to act with reasonable diligence to ensure compliance with the undertaking it gave and I find that charge of contempt established.”

According to The Australian, Fairfax execs had pointed fingers at each other for running the ad during a hearing last year.

During the hearing, Domain chief editorial and marketing officer Melina Cruikshank said she had asked the ad in question be removed from the office’s share drive.

Cruikshank claimed to have phoned former editor-in-chief Darren Goodsir to confirm the ad had been removed, who had told her the paper was being assembled.

The ad then ran in the following day’s paper.