The December 2019 digital news rankings were released today by Nielsen.

Historically due to the festive period December audiences tend to decline. However, the continued coverage of the Australian bushfires meant news site consumption was up when compared with December 2018.

Murdoch-owned news.com.au retained the top position with a unique audience of 10.6 million.

News Corp papers have recently come under fire “irresponsible” and “dangerous” coverage of the bushfires.

As reported on B&T yesterday, an email from News Corp commercial finance manager Emily Townsend was leaked to news media outlets in which she criticised the coverage of the bushfires, calling it an irresponsible misinformation campaign.

Townsend sent the blast to the entire News Corp staff in response to an email that Miller had sent, outlining the ways the company had helped support the bushfire affected communities.

In a statement, News Corp chairman and executive Michael Miller said News Corp stands by its coverage of the bushfires” and that will it respects Townsend’s views, does “not agree with them”.

He also argued News Corp does not deny climate change.

“Contrary to what some critics have argued, News Corp does not deny climate change or the gravity of its threat. However, we – as is the traditional role of a publisher- do report a variety of views and opinions on this issue and many others that are important in the public discourse on the fires,” he said.

Following News, in second place was ABC News Websites (10.1 million) which switched places with nine.com.au (9.4 million) when compared to the prior month.

Next was smh.com.au (8.8 million), followed by 7NEWS (8.4 million) in fifth position. Daily Mail
Australia (7.8million) was in sixth place. In seventh position was The Guardian (5.9 million).

There were no changes to these audience rankings when compared to the prior month.

The Age (4.5 million) was in eighth position and switched places with the Australian Community
Media Network (4.4 million). Yahoo! (3.6 million) rejoined the rankings this month in tenth place. 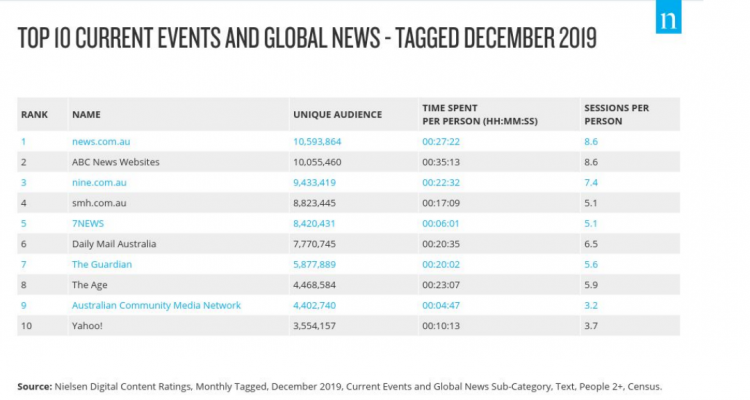