Deltra Goodrem had a go at celebrity tabloid magazine Woman’s Day for reporting she was engaged to Chris Stafford.

On her public Facebook page, the singer and judge on reality singing show The Voice, flatly denied the rumours.

Many commenters on Goodrem’s Facebook post commended her for standing up for herself and outing the magazine.

Bauer Media, the publishing company of Woman’s Day, declined to comment on the issue.

The Woman’s Day website however includes a description of the story:

“If you’ve noticed a certain glow about 30-year-old Delta Goodrem, you’d be right in thinking the beautiful pop star has never, ever been this happy,” the article teaser states.

“And that’s because she’s just months away from walking down the aisle, telling friends she’s planning her ultimate wedding to the love of her life, DJ Chris Stafford.” 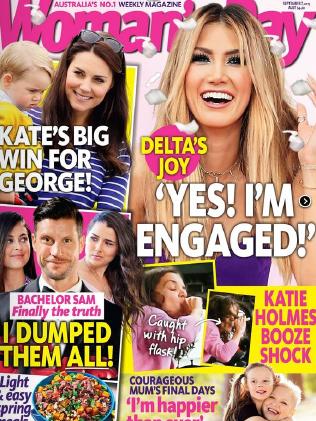 Presenters, Jonathon Moran, Soraiya Fuda and Briana Domjen in a News Corp podcast discussed the issue, questioning how magazines get away with printing things like this.

“Whatever sells mags, hey?,” said one.

Listen to the podcast here.