“More listeners are discovering the new stations and more media agencies are including DAB+ as part of their advertising buy”. 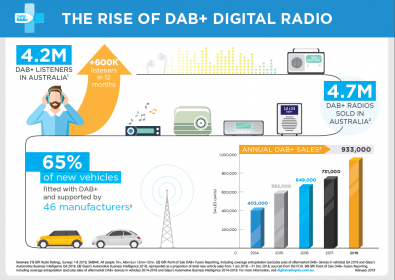 65 per cent of all new vehicles sold in Australia were factory-fitted with DAB+ radio in 2018.

Commercial digital-only stations gained 315,000 listeners, the number of DAB+ portable and home receivers in market totalled 2.56 million at the end of 2018, and the number of vehicles with DAB+ reached 2.17 million.