Advertise with us
Posted 8 October, 2018


The latest statistics from the ABS reveal that nearly half of Victorian seniors (anyone 60 and over) are aged between 60 and 69.

This is the generation of the first Rockers, Sharpies and Mods.

People who jumped the fence at the Myer Music Bowl in ’76 to hear AC/DC, who saw the Rolling Stones the first time ’round and remember when TVs were black and white, and front seats were bench seats.

The social, sometimes psychedelic, revolution of the 60s and the fabulous, if sometimes questionable, 70s was the playground of today’s Victorian seniors.

With at least half of today’s seniors carrying the profound sense of individuality and self that these two landmark decades produced, the Victorian Seniors Festival, run by the DHHS annually caters to both an active, forward-thinking and engaged audience, as well as those spending their older years more gently, both in an urban setting and further afield. 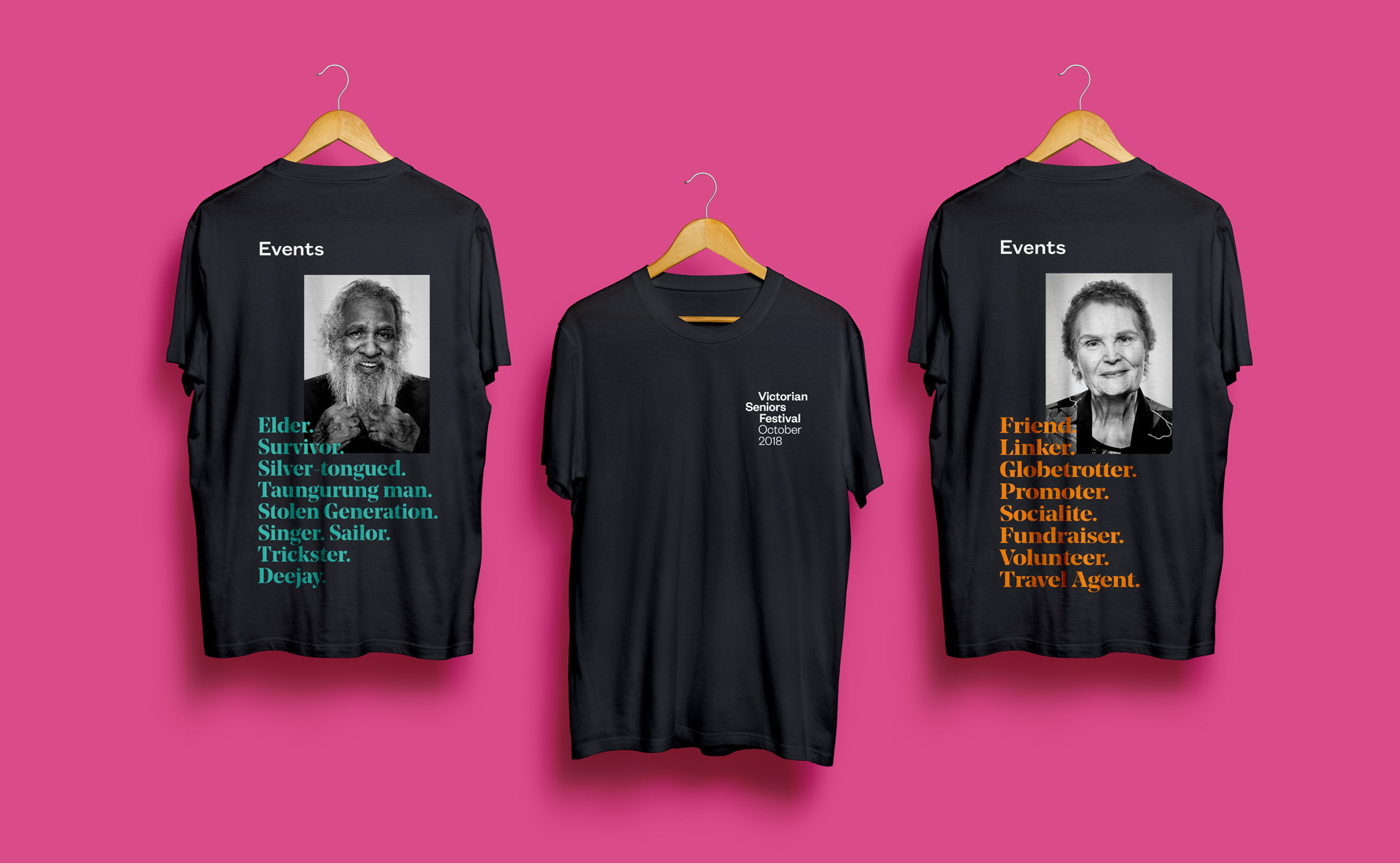 The Festival consists of activities from garden tours to rock concerts, cycling trips to come and try croquet.

Yoke was invited to respond to a brief identifying that the Victorian Seniors Festival needed 2018 collateral based on an evolution of the existing Festival brand.

After initial discussions it was agreed that given the changing nature of what it means to be a senior in Victoria, a new brand identity that would give the Festival a new more engaging presence, and remain flexible to annual themes for the next few years, was more desirable than a simple re-use of the existing style guide and imagery.

Yoke created a completely new look and positioning for the Victorian Seniors Festival.

Based on the core brand values of heart, authentic diversity, respect and community, and inspired by great poster art of the 60s, it is colourful, and presents a level of design expected of a Melbourne arts and culture event and, like the generation who are now reaching their senior years, represents a very distinct departure from past convention.

It is a recognition of the uniqueness of all of the people that the Festival is for.

It also recognised that many of the people engaging with the Festival’s marketing are not seniors at all but are people looking for ways to spend time with, and enrich the lives of, seniors they care for. 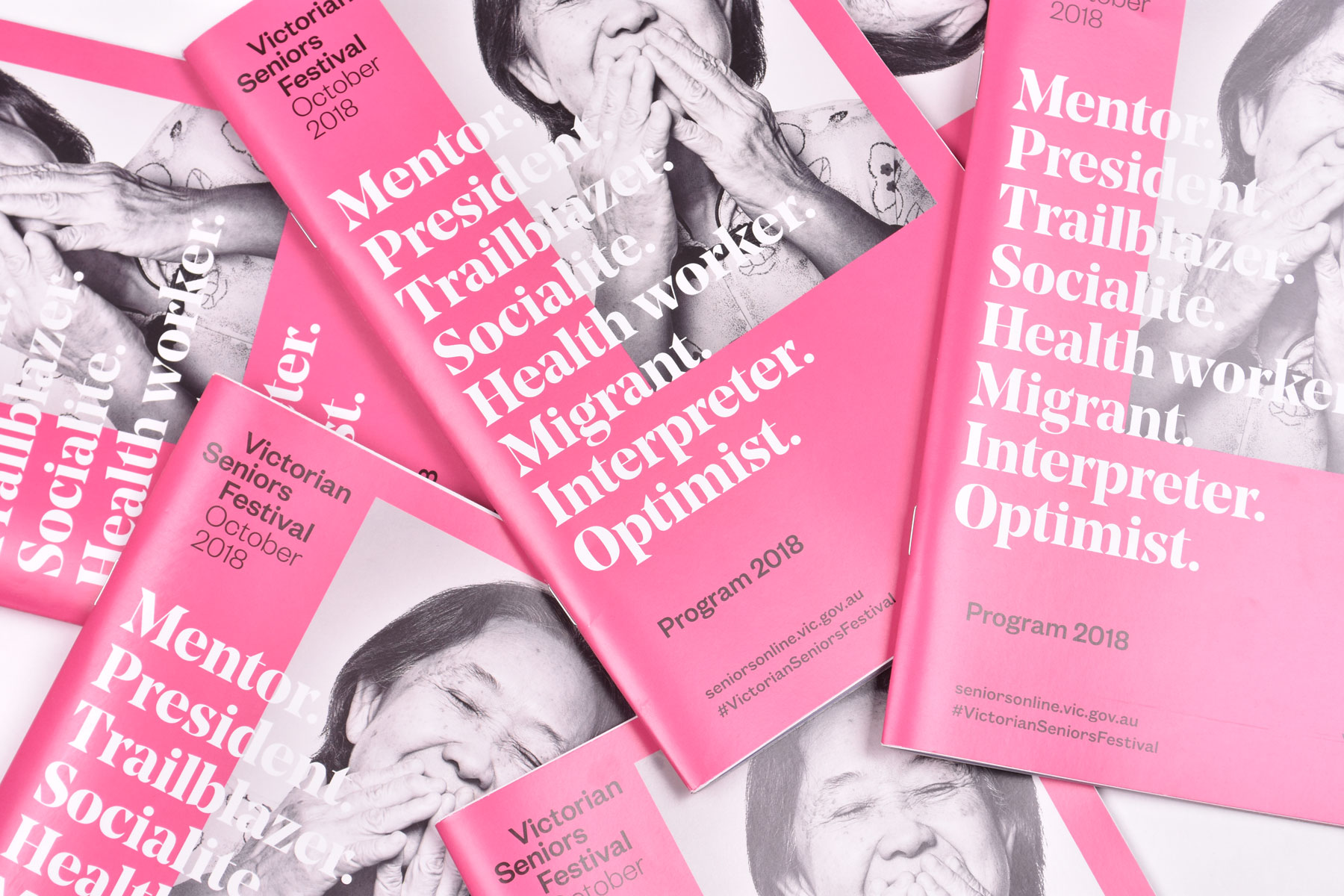 Festival communications manager Jennifer Smyth said: “Yoke has created an impressive brand to inspire curiosity around the state, a curiosity for what it means to be a senior in Victoria today, and for what the Festival has to offer.

“We’ve seen the playful application of the key brand features of a portrait with word listing throughout the councils and organisations that run events.”

“Yoke are incredibly proud to have created such a vibrant new brand that reflects the dynamic nature of both the festival and Victoria’s seniors,” Ben Kushinsky of Yoke said.

This year’s theme showcases stories of a group of individuals chosen to highlight the diversity of Victorian seniors.

Beautiful black and white portraits of the people who are the faces of the festival, coupled with a beautifully typeset collection of single words, sum up aspects of their lives while painting a living picture of who they are and where they’ve been.

The branding, including the individual’s stories and the complete broader identity can be seen all over Victoria right now.

Grab a program, and make contact with the seniors in your life who can take you to some of the activities at their festival –  you’ll definitely want to go too!!