The HSR is the front-of-pack labeling which rates the overall nutritional profile of packaged food and assigns it a rating from ½ a star to 5 stars. The more stars, the healthier the choice. Choice has identified popular products, like Nestle’s Milo, Kellogg’s  Fruit Loops and Crunchy Nut Cornflake Clusters, are fudging the health star labeling system to get a higher rating.

Nestle calculates the Health Star Rating of Milo by assuming that Australians add three teaspoons of the mix to 200mL of skim milk. Milo with skim milk has a HSR of 4.5, but Milo on its own has an HSR of 1.5 stars. Choice also found Kellogg’s is sugar-coating the truth with their low-rating breakfast cereals by including a prominent display of an ‘example Health Star Rating’ of 3.5 stars on the side of their boxes. 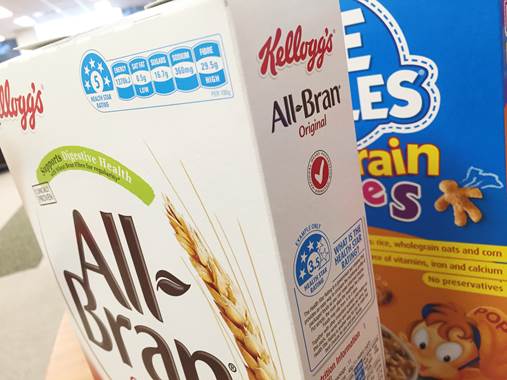 Kellogg’s All-Bran’s front and side of pack
For example, Crunchy Nut Corn Flakes Clusters, which only scores 2 out of 5 stars, has an ‘example Health Star Rating’ of 3.5 stars on the side of their boxes. Interestingly, their All Bran cereal, which scores 5 stars, has an ‘example health star rating’ of 5 stars. “Health Star Ratings were introduced to help consumers make healthier choices. We’re disappointed that food manufacturers are abusing the system to promote nutrient-poor foods as a healthier option,” said Choice’s policy and campaigns advisor Katinka Day.
A Kellogg spokesperson said to B&T: “Kellogg’s is not gaming the Health Star Rating system. The star rating for all of our cereals is shown on the front of pack. Information is also available on our website. An explanation of the Health Star Rating system is shown on the side of our packs and is clearly labelled ‘example only’. This uses 3.5 stars regardless of the product – a 5 star food such as All Bran also shows 3.5 stars on the side. We are in the process of updating all of our packaging so that the example matches what is shown on front of pack. This has already been done for brands such as Nutri-Grain and Sultana Bran, with changes progressively rolled out across the range.”
Advertise with us
Connect with:
LinkedIn