The latest edition of Condé Nast’s famed Traveller magazine has been branded insensitive after its cover star wore a singlet that attempted to bring attention to Europe’s ongoing refugee crisis.

The cover features former Miss World-come-Bollywood star, the Indian actress Priyanka Chopra. For the cover, Chopra is wearing a singlet top that reads “refugee, immigrant, outsider, traveller” but with the first three words struck out. 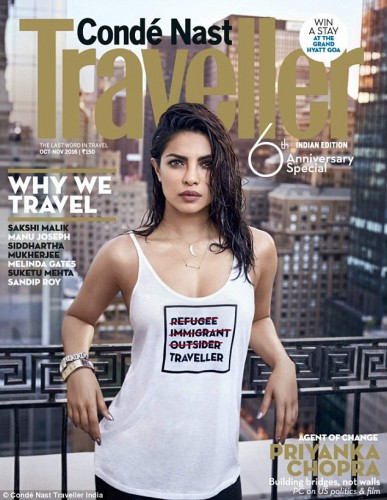 What exactly the intended message was is unclear, however, as many point out the 34-year-old Chopra was born into enormous privilege in India and is one of the country’s highest paid celebrities. Far from the tribulations suffered by most refugees.

The cover has been branded “dehumanising”,  “privilege-strutting” and accused of trivialising the escalating refugee crisis.

Both Chopra and the magazine have gone into damage control, apologising for any offence caused.

Chopra told Indian media: “(The message) got misconstrued and, I mean, I’m really sorry for it. I’m sorry it was on me, and people saw it like that. But I don’t think it was their intention, and definitely not mine.”

In a statement accompanying the cover, Condé Nast said: “AtCondé Nast Traveller, we believe that the opening up of borders and the breaking down of walls can help us discover the world, and open up our minds and hearts.

“So, when we had actor Priyanka Chopra wear a T-shirt we created on the cover of the 6th-anniversary issue, we had a point to make.

“It’s about how our labelling of people as immigrants, refugees and outsiders is creating a culture of xenophobia. We are allowing thousands of innocent people who are forced to cross borders due to unimaginable terror and atrocities to be treated without humanity and empathy.”