Director Abraham Joffe ACS said: “There are few places left in the world that you can find yourself immersed in such a spectacle of nature.

“The staggering sight of hundreds of thousands of penguins and seals, encircled by a cathedral of mountain peaks and hanging glaciers would leave even the most jaded person in total awe.

“As David says in the film, you can really become quite dumb-struck by the sensory overload and it can be hard to know where to start.

“What made it even more special is the fact that we had this place all to ourselves for several days.

“For our team, the aerials we documented were particularly rewarding.

“We went through the very involved process of gaining official permission to conduct drone operations on South Georgia’s beaches.”

Watch the short film below:

Joffe continued: “Understandably, these areas are home to sensitive breeding rookeries and it was of utmost importance that we had no impact.

“This extremely rare access gifted us the most powerful drone footage we’ve ever captured, and I think add tremendously to the final film.

“David was there with a big challenge, to capture singular frames that would somehow do justice to what we were witnessing.

“In some ways, our task as filmmakers seemed less daunting.

“As the medium of film is almost always a visual assembly, we could gather numerous shots to bring the story of David’s creative process to life.”

He continued: “What I appreciated most about filming David, was his willingness to be vulnerable. As an artist, he is his harshest critic, very willing to accept when he hasn’t managed to get the job done.

“This self-depreciation, paired with enormous drive for perfection, I would argue are two of his most powerful attributes as a world-class creative.”

Joffe concluded: “I think it’s encouraging for the younger image makers to know that even the heavyweight veterans have their bad days, miss shots and flat out screw up.

“But it’s the doggedness to keep striving, to keep grinding, that separates the good from the great.” 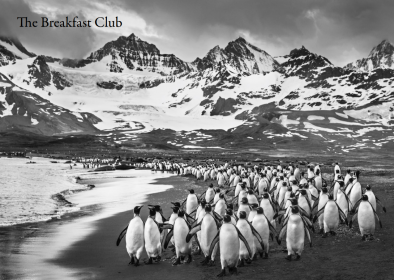 In Partnership with: Natural World Safaris

Special thanks to: David Yarrow

Filmed under permit from The Government of South Georgia and the Sandwich Islands.