Channel Seven News has had to remove an online Facebook poll regarding controversial Muslim commentator Yassmin Abdel-Magied after it was branded as racist and hate-mongering.

On Monday, Abdel-Magied announced that she was leaving Australia and relocating to London, saying she’d been “traumatised” by recent “deeply racist” criticism. 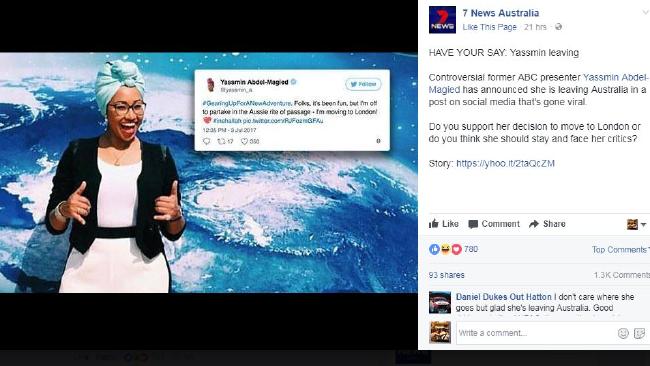 Seven’s poll asked readers, “Do you support her decision to move to London or do you think she should stay and face her critics?” The post attracted more than 1600 (mostly unsavoury) comments and 17,500 votes.

Before the poll was pulled, 15 per cent of respondents had voted “no” and 85 per cent has voted “yes”.

However, the poll was quickly labelled as insensitive and bullying by many who suggested Seven was merely adding to the hatred against Abdel-Magied.

One person added to Seven’s Facebook page: “This is awful. Why would you think it was acceptable to poll people on Yassmin’s decision to move to London? Particularly in light of the relentless racist vitriol that she’s copped that 7 News Australia is contributing to.”

Another added: “As a media outlet, you don’t think you have any ethical and professional responsibilities? Check out the comments below.” And another said: “FFS 7 news stop perpetuating hate for clicks!

In an emailed response to the poll, Abdel-Magied told News.com.au: “This is more a reflection of Channel 7’s poor editorial decision-making than anything else. The outlet’s profiling of me in this way invites prejudice and discrimination. It’s pretty trashy click-bait.”

A Yahoo7 spokesperson said in a statement sent to B&T: “The poll regarding Yassmin Adbel-Magied was posted by the Yahoo7 online news team, which administers the 7News Australia Facebook page, together with 7News. It was posted to genuinely create discussion around a balanced article and it was never the intention to generate inappropriate commentary on social media. We accept this was an error of judgement, the post has been removed and we unreservedly apologise to anyone offended.”

Abdel-Magied, a former ABC presenter, has often courted controversy with her divisive views and claims she is regularly the target for racism. She most notably put noses out of joint when she tweeted on Anzac Day that rather remember Australian servicemen on the hallowed day, instead we should “Lest we forget – Manus, Nauru, Syria, Palestine…”. She also attracted widespread criticism when she told ABC’S Q&A program that Islam was a very feminist religion. Many people believing her comments were out of touch with the majority of women living in Islamic countries.