In this case study, B&T takes a look at Ogilvy PR’s hugely successful launch of the very important Pink Hope campaign that encourages Australian women to understand and better detect the early stages of breast cancer…

Pink Hope is a preventative health organisation working to ensure every individual can assess, manage and reduce their risk of breast and ovarian cancer. These two cancers alone cost close to 4,000 women their lives in Australia each year.

The good news is that survival rates for breast cancer have improved – to levels that now mean the average five-year-survival is in excess of 89 per cent – Pink Hope still hears far too many stories from women in the community regarding late diagnosis, an inability to undergo genetic testing, as well as a lack of awareness of just what might put them at increased risk. Hearing such stories sees Pink Hope remain diligent in its efforts to ensure every individual can assess, manage and reduce their risk of breast cancer, while also providing personalised support for at-risk Australians.

In 2015, American researchers found – in the world’s first large-scale study – that women whose breasts are composed largely of dense glandular tissue, rather than fat, have an amplified risk of breast cancer (which exceeds the impact of other widely known risks on a population level, including family history of the disease). Highly dense breasts can also make it more difficult to detect breast cancer. The only way to assess breast density is with personalised screening. Over half of American states now have laws that require mammography centres to inform women with dense breast tissue that it may increase the risk of cancer and obscure a growth on a mammogram, urging them to talk to their doctors about additional imaging options (such as ultrasound, MRI or 3D mammography).

However, despite mounting evidence, Breast Screen Australia’s position is that they should not routinely record breast density or provide supplemental screening for women with dense breasts, because they believe further Australian research is required to investigate the role of breast density in breast cancer risk, prior to the establishment of any new approach. Pink Hope is of the belief that all Australian women should be informed about their breast density and understand the implications so that they can take the steps necessary to protect their future health.

Meet Renee…. (below with family) 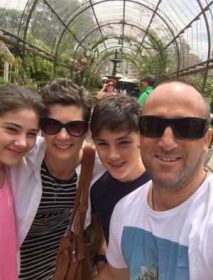 The everyday task of having a shower changed the life of Renee in 2014, after she felt a lump on her breast.

The then 44-year-old didn’t act on the discovery and thought she would wait and see what would happen. It wasn’t until her husband felt the lump that the mother of two visited her local GP.

After being referred for a mammogram, the only answer she initially received was that she had dense breasts, and that the mammogram didn’t pick anything up. She was shocked that a screening tool couldn’t pick up a lump she could so obviously feel herself, nor did she know that breast density was associated with an increased risk factor for breast cancer.

Renee went on to have an ultrasound where her doctor found an irregularity in the left breast, which was in fact, cancer. Having also found out she carried the BRAC1 gene, Renee made the decision to undergo a double mastectomy.

Renee’s now urges all women to be risk aware, especially when it comes to lesser known risk factors, like breast density. She doesn’t want anyone to have to go through what she’s been through.

Pink Hope engaged Ogilvy PR’s support to strategically develop and roll out an earned media awareness campaign that highlights the importance of Australians knowing, and being informed, of their breast density, and associated cancer risk (as the primary message), and the availability of personalised screening options.

In order to provide the most compelling story to media, a three-pronged strategy was decided on to create a complete package for media:

All Australians have been touched by breast cancer, whether it be personally, through a friend, family member or co-worker. With that in mind, Ogilvy believed this campaign was of significant interest and opted for widespread media engagement across all media types.

While breast cancer awareness month (October) was a natural fit to launch the campaign, Ogilvy recommended Pink Hope steer clear of the month, as Pink Hope’s call-to-action (to be “dense aware”) would be at risk of being drowned out by the by the sheer volume of breast-related coverage that the month always sees.

While also not wanting to detract from Pink Hope’s annual Bright Pink Lipstick Day’s fundraising efforts (on 21 September), but still tap into the timeliness of the day, it was decided to launch the breast density awareness campaign on Tuesday 26 September.

To ensure the campaign was firmly on the media agenda, ‘sell-in’ commenced one week prior.

On the 26 September, breast density and its relatively unknown link to breast cancer risk and detection was the leading health story nationally.

As a result of the widespread media outreach, 461 pieces of Australians consumer media coverage were secured. Specifically:

The total reach of Pink Hope’s “Don’t BE dense, be DENSE AWARE” was more than 13.6 million impressions.