Bruce – best known as a gold medal winner in the men’s decathlon at the ’76 Olympics and step/father to the Kardashian brood – has been openly transgender for some time; however, previous public images of Jenner as a woman certainly weren’t of the mark of her new cover shoot.

Now known as Caityln, the 65-year-old said in the accompanying video interview to her magazine spread, “Bruce always had to tell a lie, he was always living that lie. Every day he always had a secret, from morning till night, Caitlyn doesn’t have any secrets. As soon as the Vanity Fair cover comes out, I’m free.” 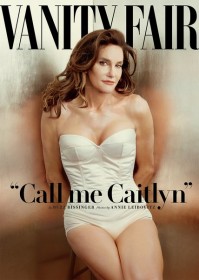 The cover is a nod to old-school glamour and features Caitlyn in a cream bustier with tousled hair and an admirable set of cleavage. She reveals in the interview that she has had facial surgery to make her look more feminine but has not, as yet, had her penis and genitals removed.

“If I was lying on my deathbed and I had kept this secret and never ever did anything about it, I would be lying there saying, ‘You just blew your entire life’,” she said

The shoot is the first public image released of the new Caitlyn with the magazine to hit newsstands next Tuesday.