Yesterday, BuzzFeed News legal editor Chris Geidner scored an exclusive Facebook Live chat with President Barack Obama. The President was there to chat about his nomination of Judge Merrick Garland to the US Supreme Court after Justice Antonin Scalia died in February. What could possibly go wrong? Well a few things did.

Facebook Live videos rolled out in December 2015 and is currently available for verified Pages, public figures using Mentions and just all iOS users. Facebook’s product manager Vibhi Kant and software engineer Jie Xu said: “People spend more than three times more time watching a Facebook Live video on average compared to a video that’s no longer live. This is because Facebook Live videos are more interesting in the moment than after the fact.”

The BuzzFeed Facebook Live interview was a first for President Obama. Less than two minutes into the Facebook broadcast, the video feed stalled and an estimated 35,000 Facebook viewers users were stuck with one short loading video of Geidner sitting alone in the White House.

Here’s the two minute video of Geidner before his big interview:

A technical glitch stopped BuzzFeed from live-streaming the interview on Facebook. Geidner directed people to YouTube (a competitor of YouTube for live streaming) to watch the interview instead. The YouTube stream was watched in real time by an 18,000 people. After the interview had finished, BuzzFeed posted the full video (without the glitch) to Facebook: 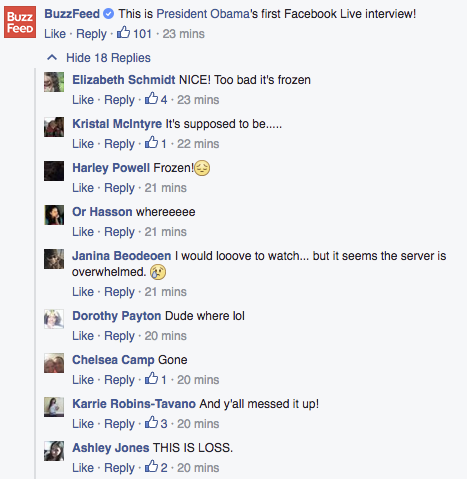 The ending of the interview didn’t go so smoothly either: