It may have started as an inappropriate ad in humble New Zealand, however, Burger King’s unfortunate chopsticks campaign has now gone global with threats of country-wide boycotts.

As reported on B&T on Monday, Burger King New Zealand unveiled its latest burger – the Vietnamese Sweet Chilli Tendercrisp. To promote the chickeny treat, its creative agency, VMLY&R, came up with a social media campaign that saw hapless people attempt to eat the burger with oversized chopsticks. 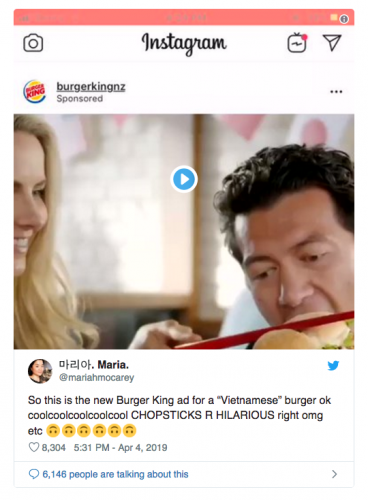 The Instagram campaign was immediately called-out on social media – namely by people of Asian descent – as “racist”, “clumsy”, “primitive” and “stupid”.

The backlash from the campaign has now gone global, with calls for people to boycott Burger King stores in Vietnam.

The hashtag #BurgerKingGetOutOfVietnam is trending on Twitter with people from around the world demanding a boycott of its Vietnamese stores.

How effective that would be remains unclear, as Burger King only has 13 stores in Vietnam that boasts a population of almost 100 million.

As one Twitter user wrote: “It’s time to learn how to respect other cultures, Burger King. You do not deserve a part of our market. If you cannot see how elegant Asian cuisine is, just get out of it.”

And there’s plenty of lessons in the debacle for adland, too.

In a statement sent to B&T, the professor of marketing at Warwick Business School, Qing Wang, said incidents like this often arose from global advertising companies not understanding local, ethnic markets.

“We have seen such a long list of adverts that have caused outrage, you start to wonder whether these brands have lost touch with public sentiment,” Wang said.

“What used to be considered ‘creativity’ is now deemed by many to be ‘bad taste’ or even ‘racist’.

“Last year Dolce and Gabbana cancelled its Shanghai fashion show amid similar accusations of racism after posting videos of a Chinese model eating Italian foods like pizza and pasta with chopsticks. That led to a severe backlash in China, with several retailers pulling the brand’s clothes. It is hard to believe that Burger King has now made the same mistake.

“A common thread that runs through many of these controversies are the stereotypes that these adverts have invoked on ethnic communities.

“While the controversies themselves may come and go, they not only leave a bad taste in the mouth, they leave consumers starting to question whether these adverts are deliberately racist.

“It is clear that Western brands need to infuse more local knowledge into their global strategies,” Wang concluded.

For its part, Burger King in New Zealand has immediately apologised for the campaign and removed it from its social media.

“We are truly sorry that the ad has appeared insensitive to our community. We have removed it and it certainly does not reflect our brand values around diversity and inclusion,” Woodbridge said.