Burger King is known for its somewhat tongue-in-cheek approach to social media, so the fast food chain’s latest stunt is no surprise.

Trumps now-deleted tweet said: “Great being with the National Champion Clemson Tigers last night at the White House. Because of the Shutdown I served them massive amounts of Fast Food (I paid), over 1000 hamberders etc.

“Within one hour, it was all gone. Great guys and big eaters!” he added. 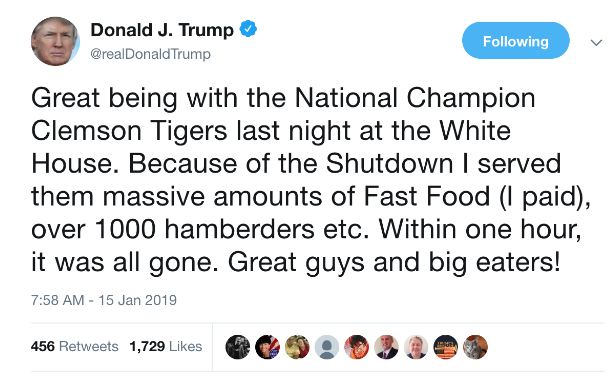 “Due to a large order placed yesterday, we’re all out of hamberders,” the chain said in a tweet from its verified account on Tuesday morning. “Just serving hamburgers today.”

due to a large order placed yesterday, we're all out of hamberders.
just serving hamburgers today.

This isn’t this first time Burger King has responded to a public figure in a cheeky tweet.

In November, Kanye tweeted out, “McDonald’s is my favourite restaurant”.

It’s not clear what caused this spontaneous show affection for Big Macs, nor was there any evidence the burger chain paid for the compliment.

McDonald’s didn’t respond to the tweet, but Burger King did, roasting the man known as ‘Ye’ with a tweet that read: “Eyes still closed I guess.”

The response is apparently in reference to Kanye distancing himself from politics when he said that his eyes are “wide open and now realise I’ve been used to spread messages I don’t believe in.”

Burger King in the UK then got in on the Kanye bashing, adding: “Explains a lot.”