Former rugby league star Jarryd Hayne’s decision to ditch the NRL and chase an American Football contract looks set to pay back and handsomely as brands and fans clamour on board.

On the weekend, Hayne successfully secured a contract with the San Francisco 49ers in a deal that has been reported as being around $A2.3 million a year – including endorsements – over the next three years.

Hayne reportedly made about a $A1 million a season playing NRL from his contract with the Parramatta Eels, representative commitments and third-party deals.

Fairfax Media is this morning reported that Hayne’s “number 38” 49ers jersey is already the biggest selling shirt on the NFL’s online store. Most of Australia’s major newspapers put the Hayne/NFL story on their covers over the weekend and again this morning. 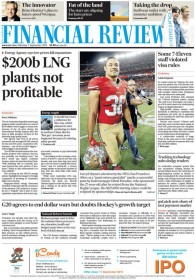 Jack Watts, the managing director of sports sponsorship firm Bastion EBA, told B&T there will now be significant brand interest in Hayne both here and very probably in the US.

“Given his status in America now the price tag will go up significantly and what a brand used to partner with Jarryd Hayne for will be significantly more now that he has global reach. His management will now be looking at endorsement deals both here and in America,” he said.

Watts cites Hayne’s deal with Telstra who not only covered his decision to chase an NFL contract but are also behind a rumoured documentary of his journey to the US.

“So there are already a lot of brands interested in him and now he’s on the roster and from the NFL’s perspective it’s going to be a boom for the sport here in Australia. The 49ers merchandise in Australia will increase by 1000 per cent or more.”

Watts, however, was less inclined to predict how much Hayne’s move might ultimately be worth to the former leaguie.

“It’s been reported he could earn as much as $US12 million but that depends on how he plays – is it all a fad? Will he be sitting on the bench for the whole season? That will determine how quickly people lose interest in him and how relevant he remains. But if he captures the imagination of the local American domestic market then the skies the limit because that’s where the real money is, those big US brands with lots of money to spend.”

Jill Stewart, the PR and marketing director of Inside Out PR and a specialist in sports marketing, says Hayne could become as huge in the US as the likes of Hugh Jackman and Chris Hemsworth.

Stewart told B&T that Hayne is an incredibly marketeable proposition both in Australia and the US.

“Who doesn’t love a successful Aussie export?  Especially coming from his humble beginnings, his journey from Minto (a working class suburb in Sydney) to Manhattan, will be passionately followed by fans in both countries,” Stewart said.

“It’s time for Jarryd to be strategic in the brands he does align with, and it’s all about his game performance from now. Selective partnerships as opposed to a splatter approach and building his profile in the US has the potential to land him some very lucrative deals.

“But he can’t forget his roots, he should maintain a presence and a relationship with fans here, whether that’s through social media, making himself available to media as well as physical visits back home, as Australians will want to be part of his success.”

The other thing here is could Hayne’s move considerably increase American Football’s reach and interest – a game played in our summer – in Australia?

“Hype’s exploded across the US and Australia for his switch of codes and countries. He’s all over the media here – he’s a favourite right now. This will create interest in the game here in Australia. We love our sport, and to have one of our own succeed in a game that’s not ‘home grown’ makes it even more appealing.