Mr Blobby is a big, pink blobby thing covered in yellow dots resembling a dangerous bout of liver cirrhosis. He also happens to be a dearly loved kids’ character on British TV.

However, he could have some explaining to do to Mrs Blobby after he was caught perving on a naked woman in a bath on a billboard in the northern British city of Leicester. 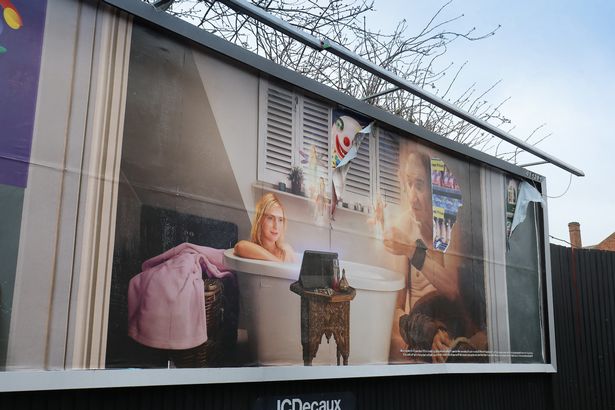 Thankfully, all is not what it seems and it appears Mr Blobby is merely a victim of some lazy poster installers.

A storm on Friday damaged the existing billboard’s skin – an ad for telco firm BT that showed a woman in a bath watching her laptop – which then revealed the previous ad that featured Mr Blobby.

As luck would have it, the tear perfectly showed Mr Blobby gurning through the woman’s bathroom shutters.

The blunder was captured by an anonymous Leicestershire chap who posted it to Twitter with the caption “The most perfect thing to happen in Leicester”.

The video has since been retweeted over 10,000 times and liked more than 36,000 times since it was uploaded on the weekend.

It even got a response from a BT spokesperson, too.

“We just want to say thank you for popping by, its always a pleasure. We do, however, have a favour to ask. Last night in true ‘blobby, blobby, blobby’ fashion, you decided to crash in to one of our adverts.

“The thing is, we’re just trying to keep people connected with wi-fi in every room of their house. We know, its pretty neat with BT you can watch TV in rooms you wouldn’t usually be able to and we’re honoured you stopped by, but there’s no need for this behaviour.

So, consider our plea, leave our adverts alone. Many thanks, BT.”

Mr Blobby Out Of Home