In this guest column, entrepreneurial strategist, Paul Broadfoot (pictured below), who is also author of Xcelerate: Innovate your Business Model, Disrupt your Market and Fast-hack into the Future says too many of us often confuse disruption for innovation…

Disruption and innovation are seen as the coolest toys in the sandpit right now. Yet these terms have been around for decades, so why are we all keen to play with them now? Clayton Christensen coined the term disruptive innovation in his 1995 Harvard Business Review article ‘Disruptive Technologies – catching the wave’. He then went on to detail the theory in his book The Innovator’s Dilemma in 1997. 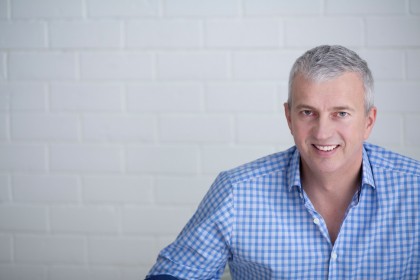 According to Christensen, disruption is a process whereby a newer market entrant introduces a product or service that caters to segments of the market that incumbents have overlooked or whose offering is less appealing. The new offerings are often not as good as the incumbents, but are often cheaper. The new offering thus finds a foothold in the market, from which the new entrant can improve performance to the point where an incumbent’s mainstream customers start switching to the disruptor.

A good example of a disruptor is Virgin Blue when they first entered the Australian skies in 2000. Their offer to customers was restricted meals, baggage and flexibility in return for much cheaper airfares. This attracted the attention of a previously unserved segment of travellers who couldn’t afford to fly between capital cities and thus tended to drive.

By 2011 when Virgin Blue became Virgin Australia, they were competing with Qantas and had gained market share from mainstream holiday and business travellers.

Many companies work hard at launching something new into their market – a better TV, a better pharmaceutical, a better muesli bar. These companies are not disruptors but innovators, working to bring a superior product to market and attract mainstream customers.

Unlike disruptors, new users are not added to the market with each innovation, but switching from the old product to the newer, better one is a result.

So if disruptors add new users to a market and innovators add better products to the same users, a company that does both is called an xcelerator.

How to disrupt, innovate and xcelerate your business growth

It’s not enough anymore to focus just on innovating your products and services because it’s no longer a guarantee of success in a market that is changing faster than all current generations have ever seen. It’s also not easy to come up with new products or services, especially if you’re under attack from the latest competition.

This is why you must become an xcelerator, a company that innovates their business model and disrupts their market at the same time.

You have to spend time innovating the way your company works, which you do through the Xcelerate framework:

You must disrupt your own thinking and learn to innovate the way you work if you want to be a successful organisation that stays in the game.