Andrew Denton’s Go Gentle Australia, with Cummins&Partners Sydney, and in partnership with the Australian Nursing and Midwifery Federation, are determined for the next vote to successfully represent the will of the people.

Over 70 per cent of Australians support the legalisation of voluntary euthanasia. Despite this overwhelming backing, there is still no law. In fact, the issue has been voted down 13 times in the South Australian parliament. ‘Be The Bill’ is a social campaign that aims to bring the voice of Australians to the politicians and into the vote itself.

‘Be The Bill’ allows anyone in Australia who supports voluntary euthanasia to create a personalised version of the Bill to remind politicians this is about real people who want the choice of a peaceful death.

“Be The Bill is designed to make politicians look beyond the impersonal legalese contained in the Bill and remind them that the proposed legislation may, one day, affect me, or them, or someone they love,” says Julian Schreiber, executive creative director at Cummins&Partners. “It’s about every one of us, ill or not, who want this compassionate option of how our lives end.”

“At the click of a button the site substitutes the word ‘person’ with your name throughout the whole Bill, and places your profile picture from Facebook on the document cover – creating your very own version of the Bill,” explains Tom Martin, ECD. “This is then sent to the 69 voting politicians to remind them that they’re voting on something that affects you personally.”

The campaign launched with Kylie Monaghan – a young South Australian who was the first person to Be The Bill. She has advanced cancer that has spread to her liver and bones. In an online film, directed by The POOL COLLECTIVE’s Ingvar Kenne, all Australians are encouraged to participate. Kylie explains that she has chosen to Be The Bill so when politicians go to vote on the issue, they “won’t just debate a bill about some person that doesn’t exist – instead they’ll debate me and my life and my choices.”

“You don’t have to be ill or from South Australia to Be The Bill,” says Andrew Denton, director at Go Gentle Australia. “The majority of Australians support choice at the end of life, but despite this there is still no law. This campaign will hopefully bridge the gap between public sentiment and political action by creating a social groundswell that politicians will no longer be able to ignore. No Australian should be left to die a lingering and painful death. We will start in South Australia and we will keep going until a compassionate law with strong safeguards is put in place to ease the suffering of those who should not be forced to endure it.”

If you support voluntary euthanasia go to BeTheBill.com to create your own Bill.

Go Gentle Australia was established in 2016 to spark a national conversation about the legal right to voluntary euthanasia. The organisation’s goal is to raise awareness by supporting people who want to end their life with dignity, and giving friends and family the confidence to stand up as strong advocates for legislative change for choice. 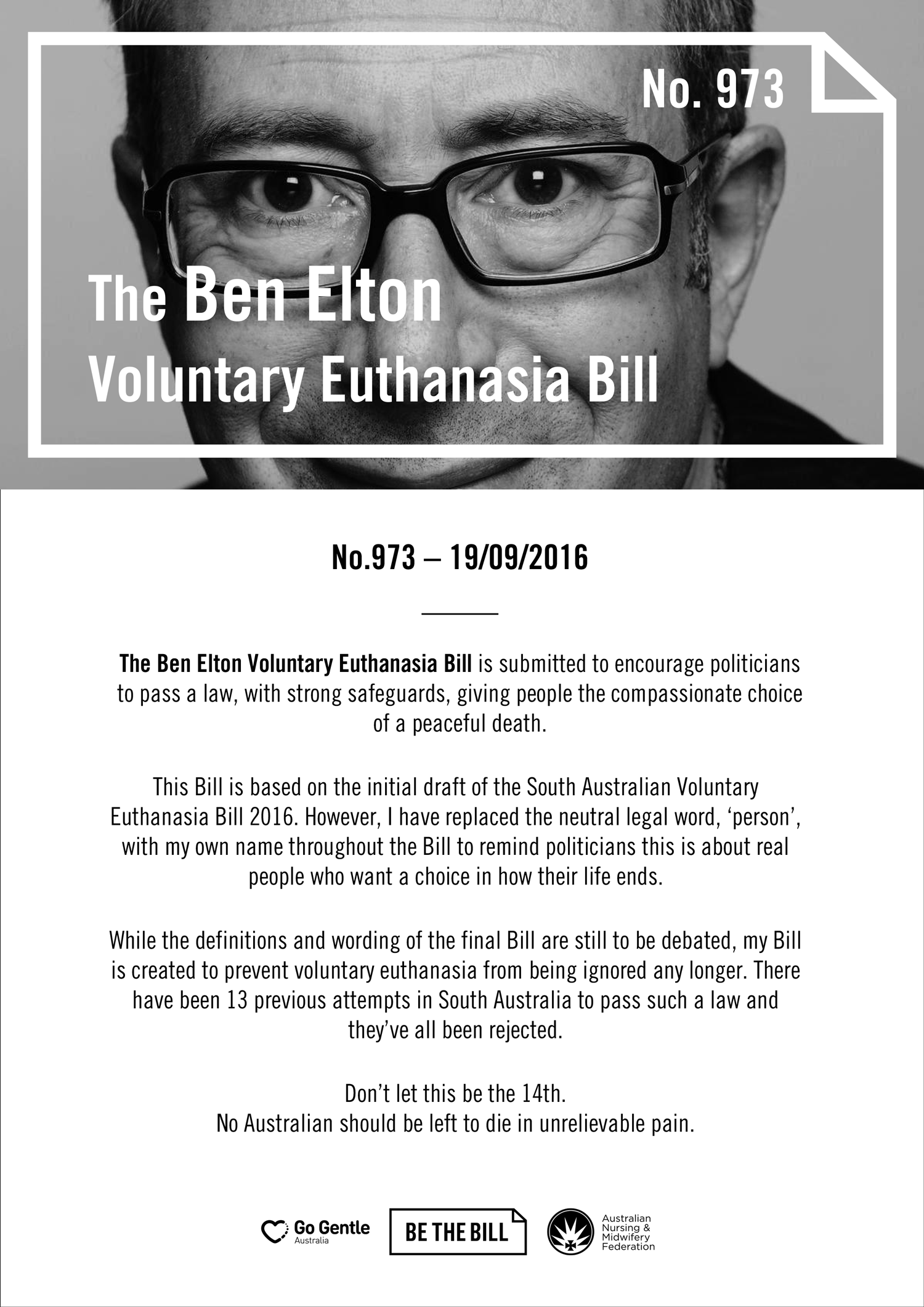 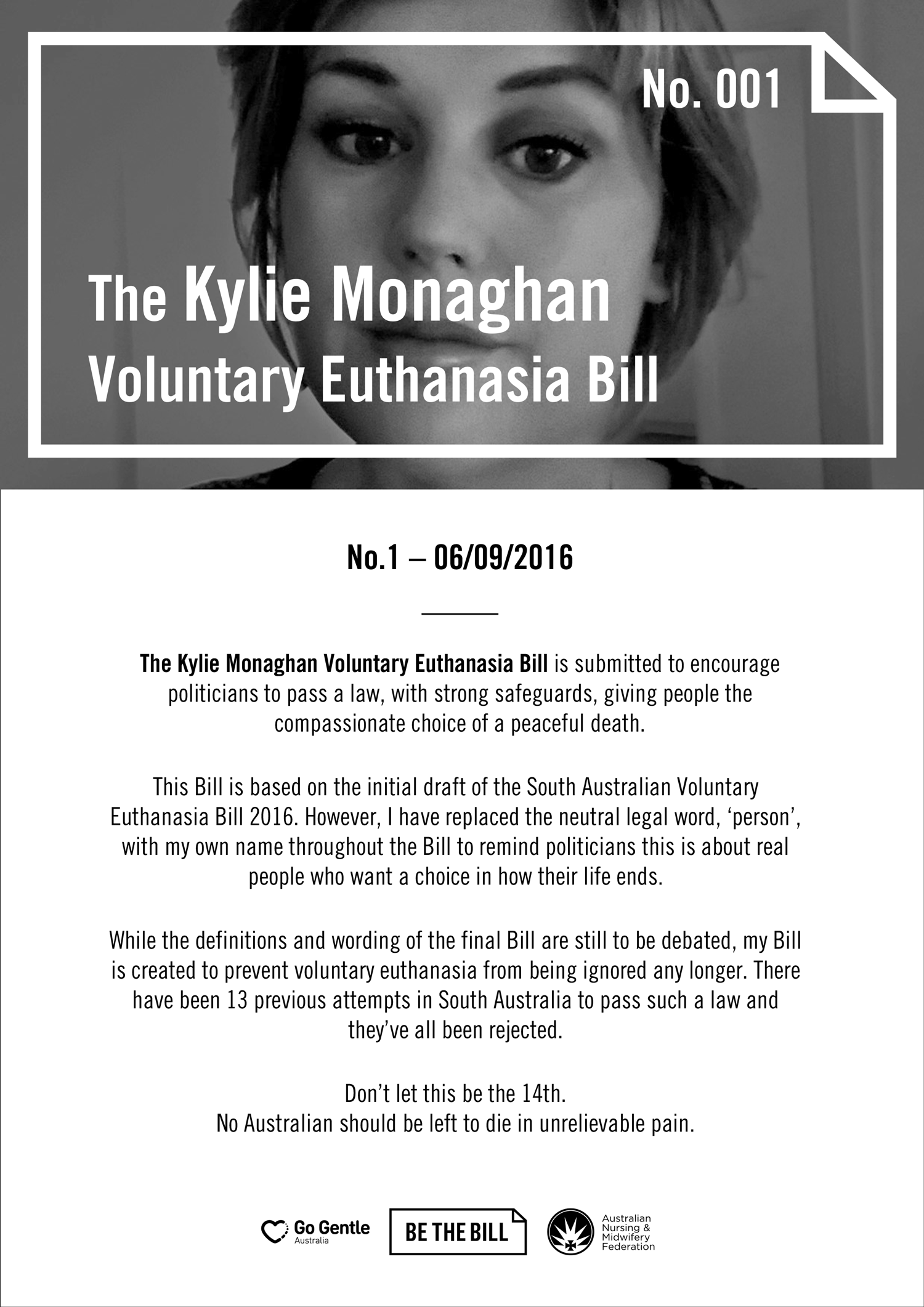 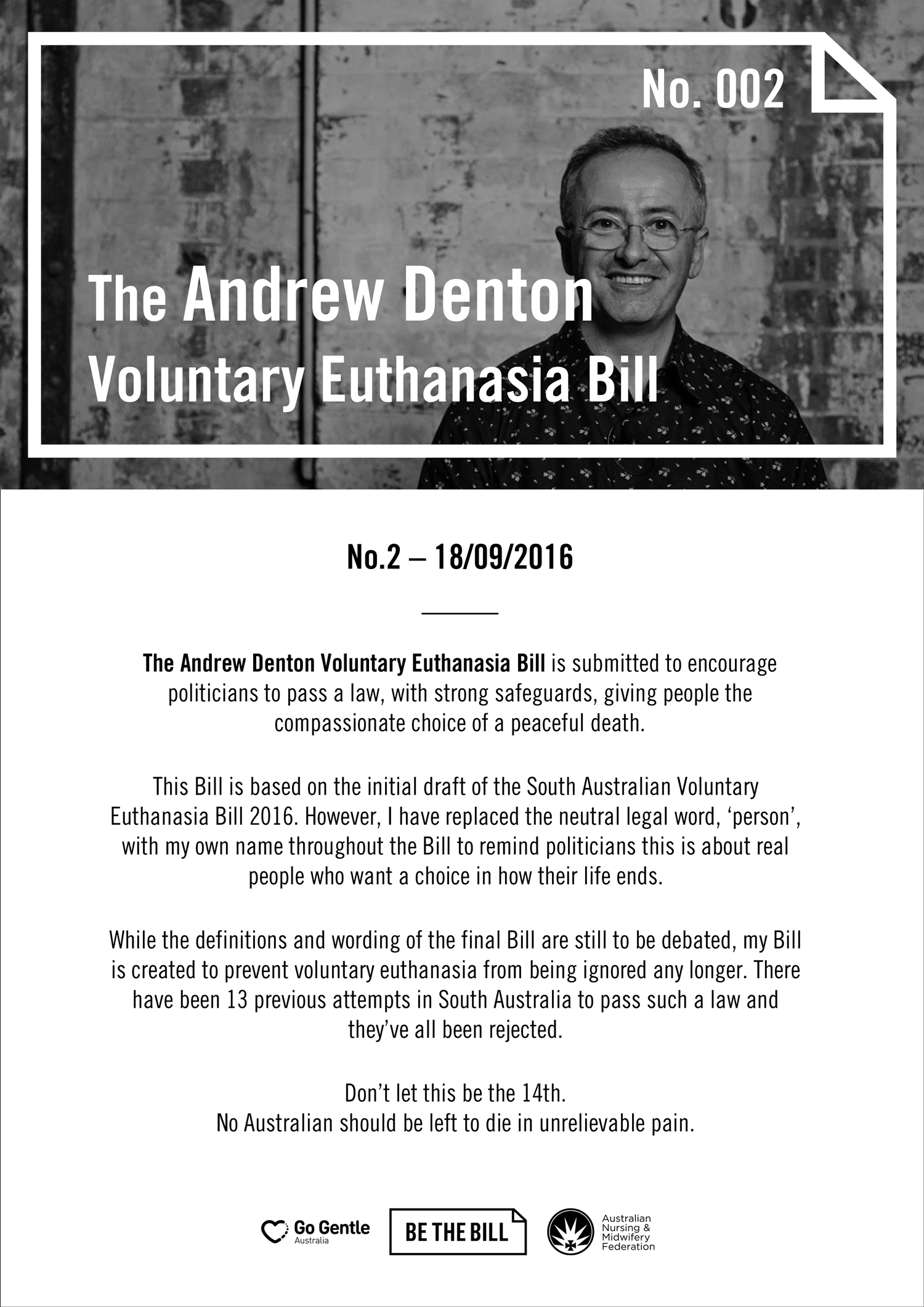